MEAT & Livestock Australia is holding firm in the face of about 30 complaints against its latest spring lamb advertisement, which has offended at least one religious group.

The new campaign under the ‘You Never Lamb Alone’ banner aims to position lamb as the meat more people can eat regardless of their religious beliefs, background or dietary requirements.

The campaign includes creative and sometimes humorous content for online, social and TV showing actors portraying the gods, goddesses and prophets of different faiths and beliefs coming together over lamb at a modern day spring barbecue.

However, Hindus have been upset by the MLA campaign and have urged Australia’s Advertising Standards Bureau board to ban the new “You Never Lamb Alone” video advertisement. Hindu statesman Rajan Zed, has claimed the advertisement allegedly trivialises the Hindu deity Lord Ganesha.

The president of the Universal Society of Hinduism yesterday urged MLA board chair Dr Michele Allan and managing director Richard Norton to issue an official apology and withdraw the ad immediately. MLA should be mature enough to understand that “love united us and brought us together and not lamb meat”, Rajan Zed’s statement said.

The Hindu statesman said Lord Ganesha was highly revered in Hinduism and he was meant to be worshipped in temples or home shrines and “not to be used in selling lamb meat for mercantile greed. 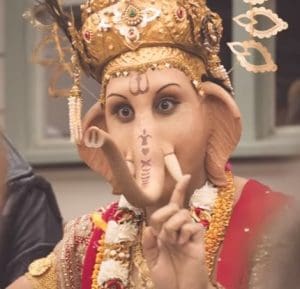 “These are mostly related to Section 2.1 of the AANA Code of Ethics which covers discrimination and vilification on the grounds of religion.”

Ms Jolly said the complaints have been raised as a case and will be considered by the Advertising Standards Board. The board meets twice a month to consider advertisements under the Codes and Initiatives.

When asked if MLA had issued an apology to Hindus or was considering banning the advertisement, MLA group marketing manager Andrew Howie said: “Lamb is the meat that brings people together.”

He said MLA’s “You Never Lamb Alone” campaigns have promoted the value of unity and inclusivity.

“This latest campaign instalment is no different.

“The campaign features gods, prophets and deities from across a wide range of religions alongside atheism, in a clearly fantastic nature, with the intent of being as inclusive as possible,” Mr Howie said.

“To achieve this we undertook extensive research and consultation.

“Our intent is never to offend, but rather acknowledge that Lamb is a meat consumed by a wide variety of cultures and capture how the world could look if people left their differing views at the door and came to the table with open arms, and minds.”

Mr Howie said the campaign remains ongoing, with a full range of activities continuing as part of the fully integrated campaign with social media amplification, Out of Home billboards, a bespoke digital media partnership, in store promotion and PR activity.

Love brings people together not lamb

“MLA should be mature enough to understand that “love united us and brought us together and not lamb meat”, he said, and the inappropriate usage of Hindu deities or concepts or symbols for commercial or other agenda was not okay as it hurt the devotees.

Rajan Zed further said trivialization of a Hindu deity was disturbing to the Hindus world over.

“Hindus were for free artistic expression and speech as much as anybody else if not more. But faith was something sacred and attempts at trivializing it hurt the followers,” he said.

In Hinduism, Lord Ganesha is worshipped as god of wisdom and remover of obstacles and is invoked before the beginning of any major undertaking.