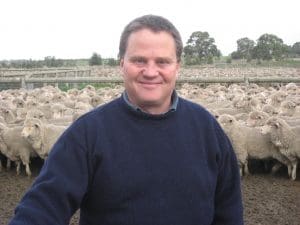 CLIMATE-READY Jigsaw Farms near Hamilton in Victoria will be a key feature of the Grassland Society of Southern Australia’s annual conference later this month.

The conference at Hamilton on August 31-September 1 has adopted the theme Ready, Set, Grow and will include a tour of Mark Wootton and Eve Kantor’s Jigsaw Farms — Hamilton district operation that has increased sheep productivity while becoming carbon-positive, and boosting its biodiversity and resilience.

Mr Wootton will also speak about the farm’s carbon offsetting, its `climate-ready’ water systems, intensive pasture program, and how more trees are adding to the biodiversity while allowing a new winter lambing system to expand.

Jigsaw Farms is made up of 13 properties covering 6700 hectares north of Hamilton in Victoria’s Western Districts. About 80 percent of the operation is dedicated to fine wool Merinos and a growing prime lamb operation, and about 20pc to a self-replacing beef cattle herd. Waterways, farm forests and wetlands play a vital role in the system.

The farm aims to integrate a profitable and productive stock and agroforestry operation while adhering to environmental guidelines.

Mr Wootton predicts carbon storage of new forests while they are actively growing will eventually outweigh the on-farm agricultural activities.

People taking the tour will see a 5500-acre block and Mr Wootton will speak about how the farm became carbon-positive by using trees for carbon offsets and shelter. The tour will also view a 5000-lamb feedlot.

Mr Wootton said that to become carbon-positive in this region, farmers will need to put 20pc of their land to shelterbelts or agroforestry.

“That could be challenging for some people but there are income streams associated with it,” he said.

Jigsaw Farms has hit that target having revegetated more than 1200 hectares with indigenous species since 1997 and plans to keep going.

“It’s a biodiversity gain but we also look at it from the shelter perspective.

“We want to get our lambing percentage up to another level so we need less big paddocks and more shelter, particularly because we’re lambing earlier in June and July,” Mr Wootton said.

The farm has moved about 40pc of its traditional spring lambing and calving to winter to finish off as many as possible on grass.

Too much pasture feed is an issue

Perennial pastures are an important piece of the jigsaw on the farm, with a 70-80pc phalaris base and the rest either over-sown with rye or straight rye.

“We strategically use urea and gibberellic acid more, so this year because we’ve sold some land and have a higher stocking rate.

“One of our weaker points is utilising our pasture to the fullest.

“We have a lot of carry-over feed, even with our higher stocking rate,” he said.

“That’s not cost-efficient, but we’d rather have a bit too much feed than not enough.”

The farm aims to be climate ready and visitors on the tour will see an extensive water system with an emphasis on deep water storage dams.

“We’re north of Hamilton and we’re nervous about what’s coming with climate change.

“We have a fully-reticulated watering system, there’s no stock on any creek lines and to stop evaporative loss we’ve got lots of deep water,” Mr Wootton said.

The Grassland Society conference will focus on soils, pasture systems, risk management and economics and will include a session on new technologies. The program will include local, national and international guest speakers and topics will include managing wet areas, lucerne for lambs, climate adaptation and mitigation in agricultural systems, satellite moisture mapping, risk management strategies for grazing enterprises, and the cost of pasture.

The society’s 57th annual conference will be held at the Hamilton Showgrounds and is expected to attract about 250 people from Victoria, South Australia and Tasmania.