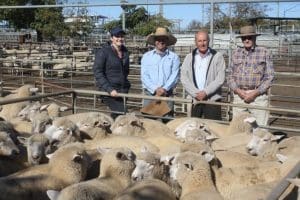 With the Shanks’ family’s $251.60 lambs were from left, Kate Shanks, Tim Wiggins of Christie and Hood at Dubbo, and Robert and Jack Shanks.

HEAVY export lambs are leading a price surge in Australian saleyards this week, fuelled by supply concerns among processors.

However, increased shipments to the United States market and higher US production could mean prices easing for heavy export lambs, according to a Meat & Livestock Australia-commissioned report.

Prices for slaughter increased at most major eastern states markets, with the indicator for heavy lambs climbing 12 cents to 694c/kg on Tuesday, 46 cents up on last week. The trade lamb indicator closed at 686c/kg, up 14 cents, and the light lamb index rose 15 cents to 664c/kg.

In New South Wales at Dubbo on Monday, heavy export lambs sold for what were believed to be record levels, peaking at $253.60, and this was beaten with $260 for lambs at Forbes yesterday.

Auctioneer Colin Hood said he had never before seen prices reach this level at Dubbo in the 55 years he has been operating at the Dubbo saleyards.

The Shanks family from Dubbo also came close to setting the record, selling a draft of 215 lambs for $251.60. It’s the highest price 94-year-old Jack Shanks has ever received. There was only a limited run of extra heavy lambs weighing over 30kg and these sold from $215 to $239/head with prices

“It’s the best price we have ever seen,” Robert said. “We wish we had some more in today to sell.”

MLA reports high prices for Australian lamb in the US

In MLA’s monthly US lamb market update, prices for Australian lamb are reported to be high in the US, as end users continue to face intense competition from other markets for imported product.

However, increased US domestic slaughter combined with high retail prices has resulted in lower retail features and a rise in cold storage stocks of US lamb. Domestic lamb prices have felt the effect of the supply increase and trended lower as a result, the report said. Conversely, imported prices continue to rise in the face of heightened international competition for sheep meat.

Imported lamb prices continue to trade above year ago levels, but those premiums will likely disappear given the shift in the supply situation, the report said. Already the price for some items is either at part or under last year.

MLA said Memorial Day holiday lamb features in the US were 25pc lower than a year ago, with lower prices for competing proteins affecting retail traction. Average retail lamb prices are significantly higher than a year ago, in contrast wholesale prices have fallen year-on-year.

MLA said the increase comes at a time when domestic slaughter is running above year ago levels, and excess production is being moved into cold storage. According to Steiner Consulting Group, the shift in the supply situation could result in easing prices for imported lamb later in the year.