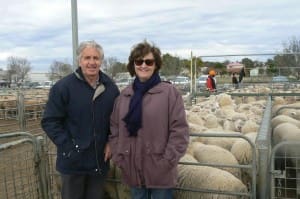 Glen and Nyoli Bell from Menindee were at Ouyen to see 602 lambs offered by their son and daughter-in-law Craig and Rebel Bell, of Bono Station NSW, sell for up to $125 on Thursday.

COMPETITION improved for quality of trade and heavy lambs offered in saleyards mid-week.

In New South Wales, buyers are being offered yardings with up to 20-30 percent new season lambs, including drafts over 22kg cwt.

After Thursday’s saleyards sales, the National Livestock Reporting Service quoted the national and Eastern States Daily Indicators for heavy lambs improving to 600c/kg, a 3 cent lift in the east, and 4 cents nationally.

In New South Wales at the Central Tablelands Livestock Exchange at Carcoar on Wednesday, the agents yarded 6250 lambs, 950 fewer than last week, and 2420 sheep, 380 less.

The NLRS said it was a better quality yarding with an improved selection of trade and heavier weight lambs. Most of the regular buyers operated in a stronger market.

The NLRS said lamb quality was plainer. About 600 new season lambs were offered, along with a good number of medium and heavy old trade weights and a handy run of heavy weights. More light Merino lambs were offered and quality slipped. Not all the usual buyers operated in a dearer trade and export market.

At the Deniliquin saleyards on Wednesday, the agents yarded 2283 lambs and 1700 sheep.

The NLRS said there were odd pens of better finished lambs off feed or irrigation country. Most of the yarding was lighter weight lambs, including large lines of plain quality Merinos.

All the regular buyers operated in a market that fluctuated on quality. The better quality domestic and export slaughter lambs were dearer compared to the previous sale a fortnight ago, while secondary lambs lacking condition and carcase shape were cheaper.

Light lambs were dominated by Merinos, which made up more than 15 percent of the yarding. Most were in very plain fat score 1 and 2 conditions and sold cheaper; at $40-$68 for the plainest and smallest pens, and from $88-$123 for the better trade weights.

The mutton market trended cheaper, with plainer conditioned trade weight ewes the most affected. Most of the lighter weight sheep sold from $46-$66. Heavy crossbred ewes made $105-$128. Heavy bare shorn Merinos sold to $100.

Numbers increased and quality was very mixed, with many producers offloading the tail end of their old lighter weight lambs. More than 5000 new season lambs were penned, along with a few pens of supplementary fed shorn lambs. These drafts offered buyers more yield and major domestic processors dominated this category. More lambs over 30kg cwt were yarded in the extra heavy lamb category. The usual domestic and export buyers competed in a dearer market.

Secondary lambs suitable to restock or feed on were in short supply, with only limited restocker activity and no lot feeder competition. Bidding was strong for well-finished new season lambs. Medium and heavy new season trade lambs made from $132-$170 to average 627c/kg cwt. Medium and heavy old trade lambs were well supplied and averaged 598-622c/kg. The better finished heavy trade lambs ranged from $144-$165.

Heavy export lambs were in reasonable supply and all buyers were eager for a market share. Heavy and extra heavy lambs sold from $156-$208, or 580-606c/kg.

Mutton quality was mixed, with increased supplies of recently shorn sheep. Ewe mutton suitable for the trade sold $5-$8 cheaper, to range from 348-407c/kg cwt. Heavy sheep were well-supplied and demand was weaker for all classes. Heavy mutton sold from $97-$134 to average 397c/kg.

The NLRS said lamb quality was plainer. The only restocker activity was for young Merino lambs. The usual buyers were present, but not all operated. Demand remained strong for better finished 3 and 4 score trade weight and heavy weight lambs that sold firm to $5 dearer. Prices for light trade weight 2 score lambs were $4-$6 easier.

The NLRS said lamb quality was mixed in the typical winter yarding. Most of the regular buyers attended.

Lambs sold $5-$8 dearer than the last sale two weeks ago. Mutton was firm.

In Western Australia at the Katanning saleyards on Wednesday, the agents yarded 3257 lambs, 257 more than last week, and 2000 sheep, 1589 fewer.

In Queensland at the Warwick saleyards on Wednesday, the agents yarded 735 lambs and hoggets, and 263 sheep.

The Warwick Selling Agents said the market was firm to dearer for all descriptions.