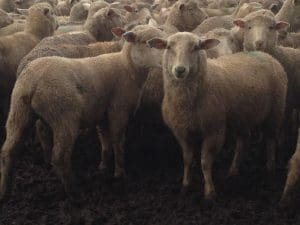 With the impacts of recent rain disrupting the flow of lambs to saleyards and direct to abattoirs, processors seeking supplies have raised over-the-hook rates.

Prices for quality trade and heavy lambs are tracking solidly above 600c/kg, lifting $5-$10 at most centres, with only prices for secondary drafts losing ground with buyers.

Trade demand was strongest for heavy lambs early this week, from domestic and export buyers, with the Eastern States Daily Indicator for the category rising 5c/kg on Tuesday to 619c/kg.

The ESDI for mutton was unchanged on 401c/kg and the national indicator was steady on 397c/kg.

In New South Wales, the NLRS said wet weather is expected to affect yardings across the state this week and most contributors held off on changing their lamb rates, with only slight upward adjustments. Mutton rates remain stable across all weight categories.

Western Australia’s OTH rates were not available when this article was published.

The NLRS said numbers were well back on the draw with substantial rain in the supply area. Quality slipped as more store lambs came onto the market. Trade and heavy lambs were well-supplied and in good condition, while extra heavy lambs were limited. Most of the usual buyers operated in a firm to slightly dearer market.

Sheep quality was plain. Heavy sheep did not have the weight of the last sale and there were plenty of light weights, but prices lifted. Medium weights sold from $85-$118 and heavy Merinos made to $158. Crossbred ewes sold to $145. Plain sheep averaged 380c/kg cwt and better covered lines made up to 440c/kg.

The NLRS said more than 30 percent of the lambs were light weights that were bought by restockers. There was also a fair supply of well-finished trade and heavy weights. Market trends were firm to slightly dearer, with heavier weights less affected. Restocker activity was boosted by rain and the improving market for the finished product. This resulted in a dearer trend with only weight reduction and lack of condition accounting for any fall in average prices.

The NLRS said widespread rain in the drawing area resulted in numbers decreasing significantly. Lamb quality was similar to previous sales, with good numbers of finished lambs and plainer types. Heavy and extra heavyweight lambs were well supplied. The usual buyers competed in the dearer market.

The NLRS said the wet conditions were having an effect on overall yardings. Quality was mixed, with some notable drafts of well-finished supplementary-fed lambs for the usual buyers.

The small yarding of sheep consisted of some well-finished heavy and medium weight sheep, and some light plain drafts. The market changed little week-on-week for most of the sheep sold.

The NLRS said general lamb quality improved on a fortnight ago, with some very good domestic and heavy lambs coming in off grain.

The market showed a dearer trend of $3-$6 on the best slaughter lambs of about 20-28kg cwt. Extra heavy export lambs over 30kg were often a few dollars easier, while light weight lambs fluctuated to be mostly similar to the last sale.

Bidding reached a top of $207.60 for a pen of extra heavy lambs estimated at 34kg cwt. There were three sales over $200, with most of the heavy lambs over 30kg selling from $180-$195. Carcase results for these extra heavy lambs varied due partially to some smaller pen lots of a few head that sold at lower rates. The bigger lines of heavy export lambs generally ranged from 580-600c/kg.

The yarding included a fair percentage of Merino lambs and bidding for these fluctuated depending on carcase finish and weight. The best trade weight Merino lambs sold dearer at $130-$151.60.

Processor demand for mutton remained strong although one export order was absent. Prices were firm to dearer than a fortnight ago. Extra heavy crossbred pens sold from $115-$135, higher per head than a fortnight ago. However, carcase weights were sometimes lower due to the excess weight. Woolly Merino wethers sold to $149.60, with a processor outbidding restockers. The best Merino ewes made $96-$128. On a carcase basis the better quality Merino sheep sold over 400c/kg, but overall mutton mostly made 360-370c/kg when all the lighter and plainer sheep were included.

The NLRS said lamb quality was average as the cold and wet weather sets in.

The NLRS said the mixed quality yarding of crossbred and Merino lambs sold to generally easing competition from the usual trade and processor buyers.