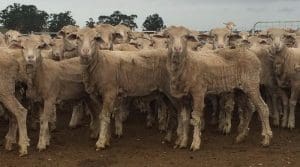 These August-September drop ealry May shorn Merino wethers, 13.3kg cwt and mostly score 2, sold for $85 at Willaura, Victoria, on AuctionsPlus this week.

Most trade, heavy and extra heavy lambs being offered are making 540-680c/kg. Some light slaughter lambs are also selling to extreme rates of up to 800c/kg underpinned by exporters filling Middle Eastern religious festival orders, restockers and skin values.

Agents are reporting fewer lambs and sheep are being consigned direct to works as over-the-hook rates struggle to stay with saleyard price movements.

In New South Wales, the NLRS reported over-the-hook lamb and mutton indicators as lifting this week after saleyard prices over the previous weeks improved. A no quote is given for heavy weight mutton as a regular contributor is currently not quoting that category.

In Victoria, the NLRS reported that over-the-hook lamb indicators increased across all categories this week, with trade weights averaging 600c/kg cwt. Contributors also lifted mutton quotes, with the medium weight mutton indicator averaging 347c/kg cwt. No trend is reported this week, due to a regular contributor not quoting.

After Tuesday’s saleyard sales, all NLRS national and Eastern States Daily Indicators for lamb and mutton, except for trade lambs, were higher.

The ESDI for mutton rose 4 cents to 384c/kg, equal with the national indicator after a 5-cent lift.

The NLRS said recent rain buoyed the market. Quality varied throughout, but there were some excellent lines of grain-assisted heavy weight lambs.

The NLRS said lamb quality was fair to very good with a strong heavy weight offering. The regular buyers attended, plus one returning after a long absence.

Demand was high for all classes of trade and heavy weight lambs. There was some good restocker demand for the plainer condition lambs. However, the quality of the store lambs was not as good and the restocker lamb market was dearer.

The low supply of trade weight lambs and extra competition created a dearer trend of $4-$7. Heavy and extra heavy weight lambs also sold dearer, with a lift in weight accounting for the extra rise in the dollar per head values.

All weight and fat classes of sheep sold dearer. Improvement in the skin market saw those sheep carrying plenty of wool attract a premium.

The NLRS said lamb quality was similar to previous sales, with a good number of well-finished lambs and plainer types. Heavy and extra heavy weight lambs were well-supplied. The usual buyers competed in a firm to dearer market.

The NLRS said lamb quality was mixed and typical of the time of year, with most pens containing some plainer finished lambs. Most were offered in smaller lot sizes, with the average draft across the sale being 20 head.

Demand from the regular buyers was strong and much dearer than a fortnight ago, especially on any of the bigger and more even lines of trade weight and export slaughter lambs. There were only a few pens of light weight and Merino lambs scattered through the market, and they sold according to quality.

Prices reached a top of $185 for a pen of export lambs estimated at around 29kg cwt. After this, there were a couple of sales in the $170 range, before most of the better finished trade weight lambs sold from $134-$159. On a carcase basis, the major lines made more than 600c/kg, with the lower rates mostly for odd pen lots of just a few head. Plainer, 2 score and secondary light weight lambs sold from $70-$120 depending on size.

The sheep sale was very buoyant for the limited selection. A few pens of heavy crossbred ewes sold from $139-$160 and a draft of heavy Merino ewes in full wool topped the sale at $167.20. Most of the bigger-framed Merino ewes sold for more than $117 and trended above 400c/kg.

The NLRS said more Merino lambs were offered and quality across the market remained mixed with the best presented lambs either off grain or irrigation.

Bidding intensified for well-finished slaughter lambs. The trend of the major domestic buyers stepping up into more weight to access better carcass quality continued, resulting in lambs weighing from about 22kg-28kg recording some of the best price gains of the market.

Buyers also favoured Merino lambs that displayed reasonable better fat cover and some of the supplementary fed trade weight Merinos came close to matching carcase prices for crossbred lambs. Buyers were more selective on the plainer and secondary fat score 1 and 2 lambs and these mostly sold at similar prices to last week.

The market really stepped up on crossbred lambs in the 24-26kg range, which sold from $153-$170, to average an estimated 612c/kg. Lighter domestic lambs with decent fat cover sold from $130-$155. In carcase terms, most domestic slaughter lambs ranged from 585-620c/kg, with select pens higher.

The best trade weight Merino lambs sold from $130-$151 and these lambs recorded some of the biggest price gains in carcase weight terms. The selection of light kill lambs was limited and most sales to processors were similar to last week.

It was a mostly plain yarding of sheep. Competition for the limited numbers was strong, particularly on heavy ewes and wethers. Merino wethers in full wool sold to $150.60 and heavy crossbred ewes from $104-$140. Highlighting the push for weight was sale of heavy hoggets to $151 and rams to $118. The best lines of Merino mutton sold for more than 400c/kg.

The NLRS said lamb quality was again good, with the usual buyers operating strongly in a mostly dearer market.

Lambs generally sold from firm to $5 up on last week’s high levels. The best extra heavy lambs sold to $222, with the heavier trade weights making $138-$164 and averaging around 610c/kg. Processors, restockers and feeders competed on the lighter lambs and they also sold to stronger competition at $74-$130, with some extra north east Victorian interest.

At the South Australian Livestock Exchange at Dublin on Tuesday, the agents yarded 9000 lambs and 2000 sheep.

The NLRS said crossbred and Merino lambs sold to strong bidding from the usual trade and processor buyers. Feeder and restockers were only occasional participants as processors were keen to secure light weight Merino and crossbred lambs.

The NLRS said lamb prices were equal to slightly dearer most lambs. Quality was mainly plain-average for lambs but there were several pens of good quality heavy weights over 23kg cwt.

The sheep were generally of good quality and medium-heavy weights attracted keen competition from a small field of buyers. Sheep prices were $10-$15 higher for light-medium weight lines and equal to slightly dearer for the heavy weights. The few 1 and 2 score sheep made $65-$75 and medium weight 2 and 3 scores sold from $72-$85, with woolly Merino making to $103. The 3-5 score heavy and extra heavy ewes generally sold from $92-$120 and up to $129. Most sheep made 325-400c/kg cwt. The good quality heavy weight 2 and 3 score rams mostly sold from $74-$90 with one pen making $115.

The NLRS said the average quality yarding had fewer good lines of well-conditioned mutton and lamb drafts. All trade buyers were active and the market firmed on last week’s very good sale for heavy and trade weight lambs. The hogget and mutton markets also remained firm.

In the northern Tasmanian saleyards at Powranna and Killafaddy on Tuesday, the agents yarded 1600 lambs, 400 more than last week, and 1100 sheep, 700 more.

Most sheep met the dearest market for this season. Medium weight ewes and wethers made $68-$94 and heavy pens sold from $80-$99.