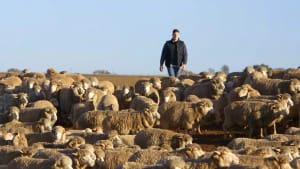 Luke hails from a sheep and grain property near Temora, New South Wales. The dual premiership player and 2014 All-Australian, often joined his siblings in helping out at shearing and lamb marking time on the family farm.

He said he often kicked a football between rows of silos, a practice that has helped his accuracy in front of goal. While he still loves coming home, these days Luke is one of the AFL’s most accurate goal kickers, equalling the record of 29 goals without missing last year.

“We were very fortunate to grow up on a farm given the great freedom you have.

“At shearing time we would get off the bus and change from our school clothes and head straight up to the shearing shed,” Luke said.

“I didn’t mind doing the sheep work as I knew just how much Mum and Dad did for us.”

A new video created in-house by AWI highlights the family property and a local football game to show how important sport, farming and community are to Luke and his family.

The video was shown as part of the telecast of the Hawthorn versus Geelong on August 15.

The Fibre of Football campaign now involves many initiatives including placing the natural fibre into football supporter apparel at http://shop.afl.com.au/woollen-range/

AWI has also partnered with The Footy Almanac to compile the Ultimate Wool Team: a team of people who have contributed significantly to both wool and football. State teams have been announced. Take a look at The Footy Almanac website. For more information visit www.fibreoffootball.com.au