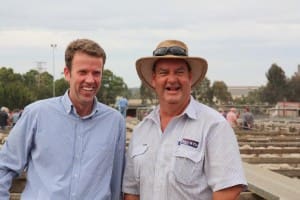 Member for Wannon Dan Tehan this week said the $1,994,981 in funding from the Australian Government’s National Stronger Regions Fund will enable the second and final stage in the $6.6 million redevelopment of the saleyards to be completed.

“For a sheep saleyard it will make it the first to be put completely under a roof and the best in Victoria.

“It is great for the district, because it is such a great generator of income,” Mr Tehan said.

Mr Tehan said Hamilton’s reputation as the premier livestock selling centre in Victoria will be further enhanced with Australian Government funding for redevelopment.

“ This announcement is very timely with the sale yards last week recording the largest single yarding anywhere in Australia in almost 30 years.

“The funding for stage two of the project will support the redevelopment of the sheep yards and roofing, a manager’s office, canteen refurbishment, asphalting loading areas and car parks, rotunda refurbishment, truck effluent, stock grids and landscaping,” he said.

“This investment into Hamilton not only benefits local primary producers but will also service surrounding local government areas, giving them access to a first class selling centre.

“The economic benefits based on the improved facilities; including the jobs created and the increased visitors to the region are significant.”

The National Stronger Regions Fund provides local community projects with between $20,000 and $10 million, covering up to 50 per cent of the project cost.  The fund encourages partnerships between project proponents and the private sector, local and state governments.

The fund has been designed to strengthen communities and deliver economic growth within Australia’s regions, enabling our regional areas to invest in their own future.