Brothers Keith and David Millard were happy with their ewe prices at the Hamilton store sale.

FIRST cross ewes sold to $282 and Merino ewes made to $164 at the annual Hamilton store ewe sale in Victoria last week.

On January 24, the combined Hamilton agents offered about 4000 ewes and ewe lambs in the sale, which was described as solid, despite the season.

A small line of 78 1.5 year-old unjoined November shorn first cross ewes topped the sale at $282 for vendor Cori-Lynn in the Elders run, but the feature of the sale was the Glenlivet Merino flock dispersal by Kerr and Co.

The Glenlivet August-September 2018 drop ewe lambs sold to $106 for the first run of 141, to a Rodwells Edenhope client. A second line of 195 made $83. The Glenlivet wethers lambs sold in two runs for $80 for the heaviest and $66 for a second run. A line of 140 light mixed sex Glenlivet Merino lambs made $60.

Glenlivet co-owners, brothers Keith and David Millard from Merino, were happy with the prices.

“The lambs did a lot more than we expected and the ewes a bit less,” David Millard said. 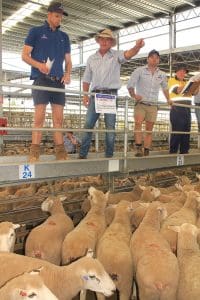 Other composite, first cross and crossbred ewes generally sold from $120-$190 depending on age and condition. A line of 115 2.5 year-old unjoined Coopworth-Corriedale cross ewes from Salamanca Pastoral Co. sold for $180  and 100 proven Corriedale ewes, 2.5-4.5 years-old and December shorn, from Croydon at Condah, sold for $150. Elders agent Ashley Crow said the quality of the ewes was the best he had seen in the sale and all good sheep sold well.