The new scoring system would replace the company’s world-first intramuscular fat bonus of 50 cents per kilogram for lambs with an IMF of 5 percent-plus. Click here for more information on the new grid system.

The system will strengthen the brand’s push to encourage production of lambs with above average marbling, discourage over-fattening to boost IMF and reward lambs free of animal health conditions and carcase defects, he said.

Mr Barton said GLQ5+ lamb is going to be on the menu of fine dining Sydney restaurant Oncore by Clare Smyth.

“We encourage high IMF for eating quality, we discourage overfattening for sustainability in land use and animal production, and we reward something that is high yielding – if it is also high in eating quality then you’ve hit the jackpot.

“We take points off it there are animal health conditions or carcase defects, to promote best practice management on farms.”

More than 100 producers attended Gundagai Lamb’s inaugural producer event at Kimo Estate’s Grain Shed at Nangus on 25 August at which the top GL suppliers were recognised. Producers were also introduced to Gundagai lamb’s Pioneers Program, to be rolled out over the next 3-6 months as a way for select producers to directly engage with the latest advancements in the Gundagai Lamb offering including;

Gundagai Lamb team members Jake Bourlet and Claire Marriott revealed that more than 170 producers consigned a combined 80,000 lambs to the brand in its start-up year, despite significant constraints on processing capacity given COVID related labour shortages. About 35pc of the lambs had an IMF of 5pc-plus.

The average distance travelled to the plant was 180 kilometres, with one seedstock producer delivering 150 lambs from 1050km away to gain the carcase feedback. Mr Barton anticipated that a greater percentage of future consignments will come from commercial producers closer to Gundagai. Aligning production with the end product

Mr Barton said it is anticipated that more producers and lambs would qualify for the GLQ5+ grading and the system allowed for genetics and best practice management to play bigger roles.

Though he said this should not be interpreted as GMP making it easier to achieve the premium price, because lambs that are over-fattened to lift IMF will be discounted.

“It really is about aligning the bonus to producers to the premium product that we are selling to restaurants like Oncore.

“This sends a clear signal to the market and to producers about our intent,” he said.

“Our intent is to evolve, provide better feedback, and keep talking quite transparently tour producers about what we are trying to do and this aligning of what we are paying producers with what we are charging consumers is a really good example of that.”

All producers were acknowledged at the event for supporting the Gundagai Lamb concept in its start-up year. The top producers were awarded and congratulated by Supply Chain Manager Dr Michelle Henry who presented awards as follows; 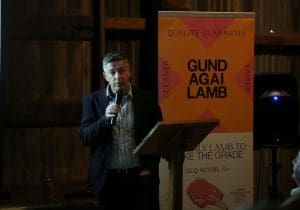 Director of GMP’s strategic sales partner InterAgri Group, Adrian McCorkell, reported trade volumes and value across 19 markets globally as well as a foundation of domestic customers, all of whom are enjoying the premium GLQ5+ lamb offering. He nominated Australia, the United States and Middle East as key growth markets for the brand, with strong demand for the premium GLQ5+ product already evident.

Mr Barton said GMP’s vision is to establish Gundagai Lamb as the highest quality and most trusted source of lamb, certified by a world-first eating quality guarantee, the new industry standard.

“We’re on a mission to provide all Gundagai Lamb producers with priceless information about their flock which allows them to nurture and breed a healthier, more resilient, better tasting lamb with a higher percentage of intramuscular fat and the perfect balance of lean meat yield.

“The result creates an exceptional eating experience; a rich and mouthwatering cut of marbled lamb, guaranteed to be of the highest quality, setting a new world standard in the lamb industry,’ he said.