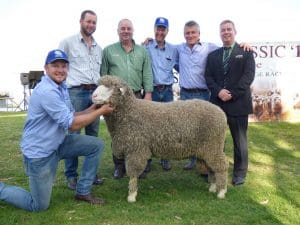 Gunallo stud co-principal Brad Schroeder said he and his parents, Ray and Judy, worked hard on their breeding program.

“It took 39 years of stud breeding to get us where we are, and really sticking to the way we want to breed sheep with the AI and ET program – it is good to get a few rewards.”

The stud’s formula included careful attention to structure and balance, purity of wool, skin and polls, and easy care traits, he said.

“You need to be very strict with your guidelines as to what you introduce into the stud and what you use.”

As a MerinoSelect member, Brad said the stud was using Australian Sheep Breeding Values to work towards lifting genetic fat and eye muscle, but without losing clean fleece weight, by working with known genetics.

“Making sure the animal is easy care is basically what we are after.”

Stuart Croft had previously bought Sims-Uardry rams for the 6000 ewes he runs with wife Anya on their 24,300 hectare Hatfield station, but lambs by a Gunallo ram he bought last year had impressed him so he returned to the SA sale. His new ram will be used to breed rams in a nucleus stud flock.

“He’s got that really sweet Gunallo wool right across him and he’s got that depth of body as well, so he is a pretty well balanced sheep.

“I’m big on the wool side of things and he is nice free-growing sheep with a long staple, which I think is where the wool cut should come from rather from a denser skin,” he said.

The Crofts’ adult flock averages around 7kg of 20-21 micron wool annually. He always budgets on marking 70-80 percent lambs, but has achieved around 90pc for the last four years. The operation revolves around dropping the Merino lambs in May-June, shearing in September then finishing the wethers on rape, turnips and plantain on a Drumborg property in south-west Victoria. Most are sold over-the-hooks sale to meet the MK or Muslim Kill market at around $90. 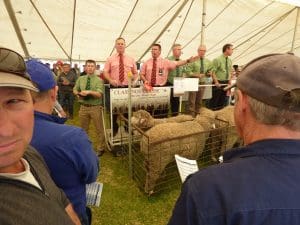 “The exceptional rams made their dough … it was just rock-solid all the way through.”

Landmark auctioneer said Gordon Wood the sale was tough in patches but the top rams reached their values.