A WOOL grower’s move to end Australian Wool Innovation spending on the WoolQ data and trading platform has been blocked, but might not be completely thwarted.

AWI company secretary Jim Story has told New South Wales wool grower Robert Ingram his resolution to end AWI investment in WoolQ and blockchain technology will not be included in the notice paperwork for the 2020 annual general meeting.

Mr Ingram’s resolution proposed that: “AWI cease immediately all investment in WoolQ and block chain technology. WoolQ to be sold or wound up within nine months.”

However, Mr Story told Mr Ingram in a letter yesterday that the timing and shareholder support/signature requirements for a shareholder’s resolution prescribed under the Corporations Act have not been met. The resolution needed to be provided to AWI with the signatures of 100 eligible shareholders two months before AWI’s next AGM on 20 November to be considered.

Mr Story also said that even if the signature and notice requirements were met by Mr Ingram’s resolution, “our external lawyers have advised that the proposed resolution would not be a valid resolution and therefore should not be put.”

“Nevertheless, the AGM provides shareholders with an opportunity to raise questions about the management of the company and this matter can and will be discussed at the AGM,” Mr Story concluded.

Mr Ingram said he was disappointed that the resolution had been rejected by the AWI board, but took responsibility for his lack of knowledge about the correct procedure. The grower said he acted on the limited advice given by Mr Story at the last AWI Woolgrower Consultative Panel meeting in August this year, when the grower groups were encouraged to draft a resolution for the AGM to settle the issue of director tenure. Mr Ingram sits on the WICP as an Australian Wool Growers Association director. He recalled being told any tenure resolution would require 100 signatures, but not that two months’ notice needed to be given.

“However, Story basically passed over it when we asked him the question.

“The question was how do we put forward an ordinary motion and he was blasé and he passed over it, and he said you need 100 signatures and you need to give notice just like you need to do for the election of directors.”

Mr Ingram said there is no inclination at AWI to support shareholders putting forward resolutions that might challenge the company.

Mr Ingram said despite the AWI opposition to his proposition he was researching another potential option under the Corporations Act whereby a self-funded resolution might be distributed to shareholders independent of AWI’s AGM notice mailing. This would potentially require crowd-funding, he said.

Shareholders cannot ‘control, usurp or exercise the powers of the directors – AWI 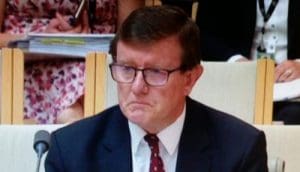 When asked on what basis did AWI’s lawyers assess that the Ingram resolution would not be a valid and therefore should not be put to shareholders, the spokesman said “the Australian courts have consistently adhered to the principle that shareholders cannot ‘control, usurp or exercise the powers of the directors’.”

“The underlying principle is that decisions in relation to matters such as investments or the disposal of assets are vested in the directors, who owe fiduciary duties and must exercise those powers in the best interests of the company.”

The spokesman refused to release the legal advice given to the AWI board on the resolution.

“It is privileged but it highlighted two main areas of invalidity – insufficient signatures by the cut-off of 2 months prior to the AGM and the wording not complying with the Corporation Law.”

When it was suggested that inadequate advice on correctly preparing a resolution was given to the AWGA and WPA representatives at the August WICP meeting, the AWI spokesman offered partial transcripts from the meeting’s minutes.

“With the agreement of all members of the WICP every meeting is recorded for minuting purposes. “Here is a transcript,” the spokesman said.

Jim Story:  Shareholders have rights, no matter what happens with this suggestion just right now, individual shareholders have a capacity to put motions forward to an AGM in their own right irrespective of what a board may think. It is a simple matter for advice for WPA to look at that if they wish to proceed with the particular initiative if that is the way things go.

Jim Story: Mentioned that the part of debate that that is prescription has been put forward, shareholders have rights. If WPA wishes to put this forward to a general meeting it can put forward a motion itself and comply with the requirements act in so doing.  I urge you to take your own advice and go from there.

Jim Story: An item of other business for information for members, the AGM the date is set Friday 20th November I think it is or whatever Friday it is. But it is starting to very much not look like a physical meeting and that it will be a virtual meeting due to COVID circumstances. The board has not taken a final position on that as of yet but will soon by way of good order and we are investigating quite how that would occur and be conducted on an orderly basis.

The AWI spokesman said Mr Story regularly attends WICP meetings and he is also available to every share holder to seek clarification on any issue.

Mr Ingram believes the WoolQ investment, estimated at $5.5-$7 million, has breached AWI’s Statutory Funding Agreement with the Federal Government because it did not address a market failure. AWI’s involvement with WoolQ in selling wool also contravened the SFA and AWI’s Constitution, he said.