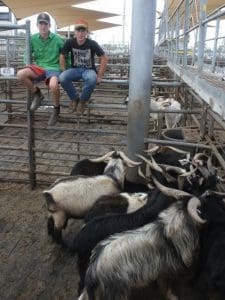 MORE buyers and the dry season helped lift prices by up to $10-$15 at the quarterly Dubbo goat sale yesterday.

“Restocker activity was limited due to the dry season.

“Competition on kill goats from processors was strong due to the lack of good quality goats available as a result of the dry,” he said.

The top-end Boer does from Michael Lindsay at ‘Goan Creek’, Ballimore, NSW, sold up to $140 in the herd dispersal. A single Boer buck made $260.

Australian bush bucks sold up to $118 for the Bruce family, Bugaldie, NSW, and bush nannies sold to $95.

Young goat catchers Jordan Sternbeck and Tom Moore, from Coolah, NSW, sold a pen of bush bucks for $110 a head and two pens of bush does, made $74 and $94 a head.