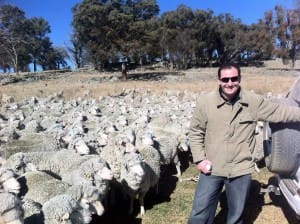 Dr Greg Falzon’s shepherd doesn’t need feeding nor sheep dogs, and it can be on the job 24/7 — even solar-powered.

His book-sized Electronic Shepherd prototype is sensitive enough to hear a sheep bleating, a dog barking, a whistle or human command, or even the vehicle or mustering dogs of a potential sheep duffer.

“You can get people talking and it is just a matter of adjusting the sensitivity and fiddling around with the adaptive software in the computer to do it,” he said.

Australian Wool Innovation (AWI) is supporting Dr Falzon’s research into the Electronic Shepherd to determine its benefits and capabilities in detecting when wild dogs that bark might be approaching or attacking sheep flocks.

But Dr Falzon said he wanted to take the ES into the area of detecting if stock theft is occurring.

“I can see a lot of potential for the technology.

“My particular driving factor is wild dogs, but stock theft is another big one.”

Electronic Shepherd will hear them coming

His Electronic Shepherd is a listening device with advanced computer software to identify the sounds of wild dogs or a stock attack, and send an alert to the woolgrower’s mobile phone or via long range radio link, giving the woolgrower an opportunity to disrupt and intercept dog attacks.

The 34-year-old lecturer in computational science at the University of New England in Armidale was presented with a Science and Innovation Award for Young People in Agriculture in Canberra last week. The award came with an AWI cheque for $21,420 to support his work.

He is researching the Electronic Shepherd as a listening station to allow flock owners to intervene before dogs get to a protected flock.

“I am actually trying to pick up dogs barking and I know that is not going to work in every scenario, but that’s the challenge in working in this space – it is different horses for different courses.”

It might not work in areas where dogs attack silently, but in other areas, with crossbred dogs that bark “you will hear them coming”, he said.

“The focus is on the listening station but there is a whole range of other sensors to pick up dogs – that’s what I am investigating.”

“One of the other ones we have been looking at is Wild Dog Alerts, which is using (motion-activated) camera traps,” he said.

Prototype proof-of-concept software has been developed for the Wild Dog Alert system and is undergoing further research and development.

“Considerable work needs to be done to develop the software to a commercial standard suitable for producers to use along with further technological innovations to ensure a high quality, user-friendly system.”

Dr Falzon has applied for funding to do field work in collaboration with producers to test the effectiveness of the system and understand how best to deploy it.

Dr Falzon said ES project is a component of a larger program studying other sensors, including drones, satellite imagery, the camera traps and GPS tracking collars for sheep to potentially detect when they are running from a dog attack.

“I don’t think there is one piece of technology that is a (total) solution so our team in the Precision Agriculture Research Group has been investigating the different possibilities and combinations.”

Dr Falzon has witnessed first-hand the devastation that wild dog attacks can have on stock when he lived on his family’s property in the Mid North Coast region of NSW.

“If sheep producers could reliably detect dog attacks as they are occurring or just prior to an attack, at any hour and at even the most distant locations of their property, then there could be an opportunity to thwart a dog attack,” he said.

“Early warning technology could allow woolgrowers and sheep producers to take the initiative back from the dogs and allow farmers to protect their stock.”

The Electronic Shepherd system’s listening station will be placed in the paddock close to the flock, continually listening to the surrounding environment and monitoring the flock as it goes about its daily activities.

“Sophisticated real-time embedded signal processing software and algorithms would automatically detect the presence of predators, such as a dog bark, or an attack on the flock indicated by extensive bleating or sheep running.”

Dr Falzon said some producers had told him the technology would be useful for just telling them that wild dogs are in the area, so they can start tracking or hunting them on the ground or from the air.

The ES project will seek to develop proof-of-concept technology. A key objective of the development will be to determine the effective range of the Electronic Shepherd and optimal configurations for whole flock monitoring under realistic conditions encountered on a sheep property. The accuracy of system, false alert rate and variables such as the impact of different weather conditions will be monitored and addressed.

Dr Falzon said a key part of the project would be to increase the profile of the technology, get it working reliably and make it available for farmers as soon as possible.

“But the main stumbling block for me is driving it to commercialisation.

“There is research tools out there – they might not be all surefire turnkey systems, but we’ve got them and I want to get them out to farmers.”

He is aiming to have a prototype Electronic Shepherd system within 12 months.

“What happens there is to an extent then is a bit hard to predict, because I am not a commercialisation person.”

When asked why the motion-sensitive GPS collar technology was not commercially available, Dr Falzon said he was concerned the connection between research activities and producers’ needs was not strong enough.

“It’s all about a commercialisation strategy – someone has to pick this up and get it out there.

“As a research tool they exist, the problem is with all this technology, I wouldn’t say it is at the stage where it is a turnkey solution for a producer to use,” he said.

Technology problems include limited battery life or technical difficulties with set-op, he said.

He wants to mitigate such barriers to farmer use in the ES and Wild Dog Alert systems.

“I want to see if this works then let’s get it out there and not waste a lot of time with research and have no outcome from it – let’s get this in the hands of producers.

“We need to have commercialisation partners.”

A cost-benefit analysis of AWI’s investment into wild dog control from 2010 to 2013 conducted by the BDA Group showed an $8.60 return for every dollar invested. The full report can be found at wool.com See what AWI is doing to help producers protect their flocks from wild dogs and apply for funding for control projects at www.wool.com/wilddogs