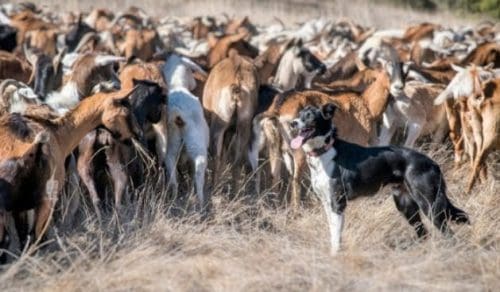 A working dog with rangeland goats.

In the last quarter, goat slaughter hit 344,000 head, an increase of 81 percent on last year and 32pc on the June quarter.

The rise in slaughter translated to higher production and highlights that the goat population rebuild has matured, with producers now harvesting and mustering goats again after two years, MLA said.

Goat carcase weights remained above 17kg for the third consecutive quarter, in part due to the improved seasonal conditions and abundance of feed. However, the rise in goat carcase weights can also be attributed to a shift in the industry towards managed goat operations, where producers are not processing every goat they muster, MLA said, but are now keeping lighter goats for longer and finishing them out to heavier weights.

MLA said goat production remains concentrated in Victoria and Queensland, where 88pc of goats are processed. However, most of the goats processed in these states come from NSW.