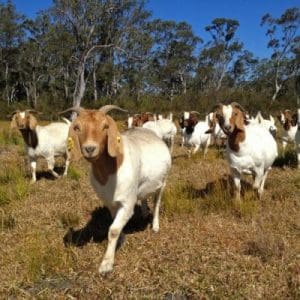 EASTERN states goat slaughter in 2018 has continued to track below both the five-year average and year-ago levels as hook prices steadily increase, Meat & Livestock Australia said.

MLA said for the week ending 21 September, there were 16,823 head of goats slaughtered across New South Wales, Queensland, South Australia and Victoria – barely 50 percent of the five-year average during this period.

Year-to-date goat slaughter, at 264,397 head, is down 21pc from last year. New South Wales, SA and Victoria have seen the biggest year-on-year declines in slaughter, with 46pc, 42pc and 23pc decreases recorded respectively. For the year-to-date in Queensland; however, there has been a 10pc increase to 30,148 head, compared to the same period in 2017.

Prices on a steady incline

MLA said goat over-the-hook indicators have continued their slow but steady increase. This week, the 12–16kg carcase weight (cwt) over-the-hooks indicator rose 8c/kg cwt from a fortnight ago. At 548 cents, it is a 91-cent increase year-on-year. However, this is still well below the indicator of July 2017 of 683c/kg cwt.

Exports have reduced with supply

As the majority of Australian goat meat is destined for international markets, the reduction in slaughter has meant a reduction in exports, MLA said.

Shipments to Australia’s other major goat meat destinations – Taiwan, Canada and South Korea – were also down considerably in August; at least 50pc lower than last year, according to the Department of Agriculture and Water Resources.