Goat meat prices are lifting after months in the doldrums 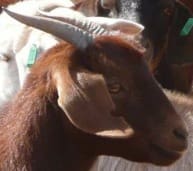 GOAT meat indicators are on the rise again, according to Meat & Livestock Australia, while slaughter and exports have been tracking below year-ago levels.

MLA said over-the-hook goat indicators, which typically increase over winter as supply tightens, rose to 508c/kg cwt last week, up 24 cents from a fortnight ago.

It is the first time the indicators have risen above 500c/kg cwt since the market found a new level in September 2017, MLA said.

The recent upward trend may be influenced by the eastern states goat slaughter dropping to its lowest point since the beginning of the year, in contrast to 2017, when more numbers were processed, but price movements were uneventful.

MLA said eastern states goat slaughter has tracked below year-ago levels since March this year, with processing in May so far totalling almost 92,000 head, easing 4 percent on 2017 levels and 18pc below the five-year average.

South Australia had the largest decrease in slaughter for May, of almost 10,000 head year-on-year, or down 42pc. However, slaughter rose in the two largest states for goat processing; up 13pc in Victoria and 7pc in Queensland. National goat slaughter for the year-to-date (week ending May 25) reached almost 649,000 head, back 21pc on 2017 levels.

MLA said Australian goat meat exports for April were 24pc lower year-on-year, on the back of lower supply, totalling 2,252 tonnes shipped weight. Shipments to the US, Australia’s largest goat meat export market, accounted for 67pc of the April total, at 1505 tonnes, down 32pc on 2017 levels. April shipments to Taiwan, the second largest market for Australian goat meat, decreased by 21pc year-on-year, to 261 tonnes. Volumes to Canada declined 32pc to 46 tonnes, while Trinidad and Tobago recorded an increase of 48pc year-on-year to 111 tonnes.