FENCING requirements for goat farming is the focus for the first in a series of best practice videos by Meat & Livestock Australia to help boost productivity in the sector.

The first video in the series features goat meat producers from across Queensland and New South Wales who manage a mix of enterprise types. 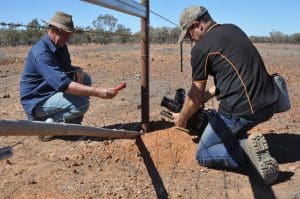 The videos would be released over the next 12 months to add to MLA’s extension resources for goat meat producers. MLA’s goat industry project manager Julie Petty said the videos were produced in consultation with the Goat Industry Council of Australia.

“The videos are designed to answer commonly asked questions from current and potential goat meat producers to help build their knowledge and skills to improve business performance, and to lift productivity.

“Topics covered in the series of videos include nutrition, profitability and target markets for goat meat producers,” Ms Petty said.

“They also include commentary on why producers recommend others get into the industry, how to make the transition and why it makes sense to move away from harvesting goats and into semi-managed herds.

“To stabilise goat meat production in Australia and grow domestic and international markets, an increase in the number of goat meat producers and volume of turn-off is needed,” she said.

“The rangeland goat is the major source of goats for Australia’s industry, accounting for approximately 90 percent of production.

“Rangeland goats have traditionally been opportunistically harvested by producers but there is a shift to semi-managed production systems to increase supply and improve quality, carcase weights and consistency,” Ms Petty said.

MLA’s extension services to goat meat producers have also been further boosted with the addition of an updated Parasite control module in MLA’s Going into Goats guide.

The online GiG guide has 12 modules that address different aspects of the goat production system, which can be accessed here.