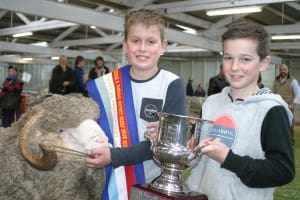 Hazza the Merino ram, son of Harriet the ewe and led by young Harry Miller, has reigned supreme at the 2014 Ballarat Sheep Show.

One week after winning Victorian Ram of the Year at the Australian Sheep and Wool Show in Bendigo, Harry Miller, 11, led his ram to another win against about 150 sheep on Sunday.

The finewool ram’s supreme Merino exhibit win at Ballarat completes a big triple for Harry – the ram was also supreme Merino champion sheep at the Campbell Town Show in Tasmania in May.

Harry’s father Rod said the two-year Glenpaen stud ram was a triplet out of the ewe Harriet – regarded as the best ewe in the family’s Brimpaen-based flock. Harriet was first cared for as a lamb by Harry when he was just six years old.

“So it’s Harriet the ewe, Hazza the ram and Harry the holder.”

“He stands well and where you put him he will stay.

“But Harry has always been good with stock – at six years old he was penning up in the woolshed – even the dogs listen to him.

“The shearers were amazed.”

Harry’s older brother Will, 13, also showed his poll ram in Bendigo and Ballarat, managing reserve champion finewool ram to Hazza on Sunday. But Will shone in the junior judging at Bendigo, managing a second place.

The boys’ mother Sue said her sons got up early as 4am to help their father feed and load the show sheep.

“They are following in their Dad’s footsteps.”

Medium Merino judge at Ballarat, Paul Hendy, said the decision to award supreme exhibit to Hazza was unanimous with the other judges, Andrew Davis, finewools, and John Sanders, superfines.

“This ram just speaks for himself – he is a big upstanding sheep with lovely evenly crimped fine wool.”

Other Merino ram champions at Ballarat included Koole Vale in the medium-strong category; Montrose Hill’s superfine and Glencaber’s ultrafine winner. The grand champion Poll ram of the show was the Kerrilyn stud sire.

The top junior handler in the Merino classes and winner of the Malcolm Holding cup was Alex Russell, 10, from the Melrose stud.