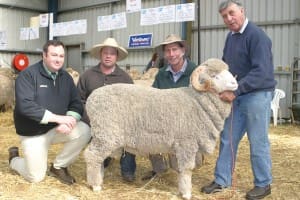 IT will be a bit of a homecoming when the top-priced Merino at the Hamilton Sheepvention ram sale arrives in the Monaro region of New South Wales.

The $21,000 ram was sold by Landmark for Robert Harding’s Glendonald Merino stud at Nhill at the ram sale yesterday.

The autumn-shorn ram came from Glendonald’s Purple Manderley family, which holds sentimental as well as practical significance for its buyers – Michael Hedger from the Snowy Plain stud on the Monaro and Michael Green from the Boudjah stud at Cooma.

They liked the 15-month-old ram 18.8 micron ram for his volume, balance, dual purpose wool and carcase qualities. But the ram’s link back to the now defunct Manderley stud also meant something to the Monaro breeders.

“The Purple Manderley is a Cooma family; it is one of our families started in Cooma in the old Manderley stud.

“The principal of the Manderley stud John Williams is a well-known classer and is still in Cooma,” Mr Green said.

“Having seen the way the way the Manderley sheep performed on the Monaro back in the 60s and 70s, the way they have bred on for so many studs over so many years it has always been a very valuable bloodline in our Merino industry.

“He is coming home.”

Mr Green said the Manderley sheep were developed when wool was the principal source of income, though now probably 50 percent of a commercial Merino operation’s income comes from meat sales – lamb and mutton.

“The Merino population has shrunk, but all the analysis shows that a self-replacing Merino flock is right up there in financial terms.”

The Glendonald ram is the perfect sheep to breed wether lambs for over-the-hook sales with his thickness of loin and hindquarter, he said.

“There is a beautiful carcase there and it is what the market wants.

“He has very good quality wool, plenty of it and backed that up with the carcase qualities he has … his progeny will be in the front lane of a sale no trouble at all.”

Mr Green said Merino breeding had developed from first joining of Merino ewes at two-years-old to performance from one-year-olds in the past 35 years.

Mr Hedger said he liked the ram for his volume and balance, and brilliant white and creamy wool. He has seen the performance from Purple Manderley blood sheep through a Roseville Park ram he used, but it was the first time he had bought a Glendonald ram.

Mr Harding the Manderley sheep were known for their very rich medium wool, that suited many rainfall areas.

The top-priced long wool ram was Langdene Pastoral Company sire that was sold for $14,000 to the Kerrsville Merino Stud.

The Macquarie Dohne Stud sold the breed’s top-priced $10,000 ram to a sysndicate of the Kardinia and Midgery Dohne stud. Blackwood Corriedales topped their section of the sale with a $1000 ram that went to the Salamanca Partnership, through LMB Linke Hamilton.