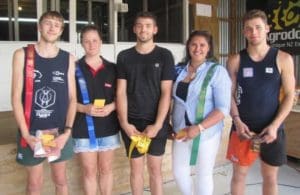 FRENCH shearer Jeremy Leygonie hasn’t yet emulated his brother’s achievement in shearing at a world championships.

But he could claim some form of bragging rights after winning a truly international event at the Rotorua A and P Show’s Agrodome Shears on Sunday.

The Shears’ intermediate championship final came to a rare end at the Ngongotaha showgrounds on Sunday, when it featured five shearers from four different countries, and not a New Zealander in sight.

The 22-year-old, from near Toulouse, completed a double for the weekend after also winning at the Taihape A and P Show on Saturday. The runner-up at Rotorua was Annalise Humstad, from Norway, Welsh shearer Gwydion Davies was third, fourth was “Scots-Maori” Emily Te Kapa, and fifth was Gethin Lewis, also from Wales.

The intermediate class attracted 16 entries, and Leygonie, working for Te Kuiti shearing contractor Colin Thirkell and heading home in a fortnight for the  February 15 start of the season in France, showed he meant business.  He cut out his six sheep in 8 minutes 40 seconds, three seconds quicker than Humstad, as the two battled for time points side-by-side on stands four and five.

With Humstad having clearly the best job points, Leygonie needed the better quality points in the pen judging to claim the win, by just 0.984 points.

“It was perfect,” he said later.

Otherwise there was a reversal of fortunes for visitors when the Welsh national team of Matthew Evans and Alun Lloyd Jones and Matthew was unable to match Saturday’s tour-opening win over a Taihape show selection, being beaten comfortably by a Rotorua show team of King Country shearers Floyd Neil and James Ruki.

Neil dominated the match, being the only shearer to go under 10 minutes for the 10 sheep and ultimately carding the best individual points as the show team won by almost 8 points.

There was a big moment for Hawke’s Bay gun Rowland Smith as he won the Agrodome Open final, avenging a result of 12months earlier, the last time he had been beaten in an Open final in New Zealand.

With wins at Taihape and Rotorua over the weekend, Smith has had 27 consecutive wins in finals in New Zealand since finishing fourth to Mutch in last year’s Rotorua final. It was Mutch who also won at Tauranga a fortnight ago, when Smith failed to qualify for the final, the only such demise in the 12 months.

It was the former prolific winner ‘s first win since the Taranaki Shears last March, but it was a comfortable victory over former New Zealand champion and fellow King Country wool handler Hanatia Tipene. Third was Sue Turner, of Aria, and Amy Karska, of Te Karaka, was fourth, the only competitor to reach the open wool handling finals at Taihape and Rotorua.

Results from the Agrodome Shears at the Rotorua A and P Show, Ngongotaha, on Sunday, January 28, 2018