FORWARD wool trading levels were light, but consistently at a premium to spot levels as the auction market endured another tough week.

The auctions began on Tuesday under poor demand signals and sluggish competition.

There was improved activity by Wednesday and the market closed on a brighter note.

Demand for forward cover built as the week progressed, with the pre-Christmas quarter finding welcomed support. October, November, and December are bid at a 10 to 15 cent premium for both the 19 and 21 micron contracts.

A base appears to be set all the way to March 2023, giving growers the opportunity to have some levels to budget against and to set some strategies to capture some price certainty in these volatile times.

We expect bidding from exporters and processors to remain solid as they look to lock in some margin.

The anticipated better demand next week will likely drive up the spot prices. For those growers with no forward cover this could present the best opportunity of the current season to capture a premium to the current market. 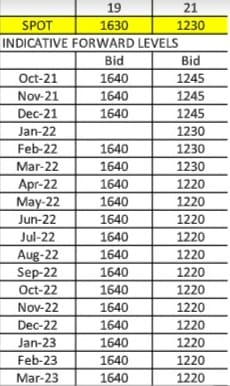