FORWARD wool trading activity picked up this week, though it was a challenging week on the spot auction market.

The strong finish to the auction series last week solidified the premiums being offered in forwards.

Trading was steady across the week, with the majority of trades focusing on the finer microns. The 19 micron contract traded in a tight band of 1630-1660 cents, but over ten different maturity months, from May through to October 2022.

In the start to the auction series on Tuesday, all microns were under pressure, with the finer qualities most affected. Large quantities, logistic uncertainties and delays causing financing issues for exporters were all cited as the causes. The softer market continued into Wednesday, with the gains of last week all but given back.

Forward contracts continued to trade at a premium to cash of between of 30 to 40 cents. Forward bidding for maturities out to the end of the season and into the spring came back in sympathy with the spot market, but premiums are still maintained into the New Year.

We expect that the whipsaw nature of the spot auction market is likely to continue as sentiment, finances, delays and auction quantities ebb and flow.

The value of growers setting forward targets has been evident over the last two months and is likely to continue as buyers look to hedge their forward positions. 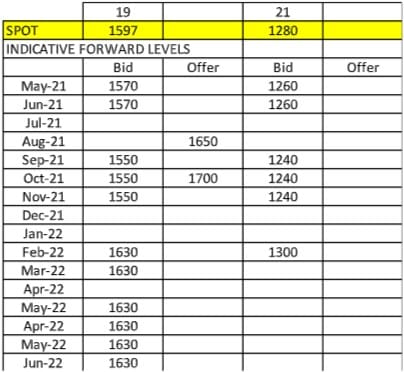