WOOL forward markets continued to trade in premium early this week across all microns and maturities, but pulled back against modest demand and as the Australian dollar strengthened against the US currency.

It was a difficult end of week for all commodities.

Cotton futures reached a two and half year high mid-week having increased 23 percent since the Christmas close, before retreating 5pc overnight.

The Merino wools fell between 1-2pc this week, with the fine qualities most affected, but the wool forwards continued to trade in premium early in the week across all microns and maturities.

Forward trading volumes were once again light, with sellers reluctant to hedge at levels under the two-year average.

Forward trades early in the week saw the 19 micron index peak at 1650 cents for July and 1640 cents in January. With the spot auction facing the headwinds of a strong Australian dollar and modest demand, Autumn forward levels pulled back. Pleasingly, Spring and first half levels remain bid flat to cash.

The table below shows the contrast in forward levels for wool and cotton for the next 15 months.

Wool growers have rightly complained of the constant backwardation (discount) in the forwards. This is not the case in recent times. Sentiment in cotton appears to indicate that the upward cycle from its lows of April 2020 of US48c/kg may have lost momentum.

For the wool forwards, we expect a similar pattern to the close this week. Exporters and processors will likely be cautious in the short to medium term, but look to hedge into the Spring and beyond. 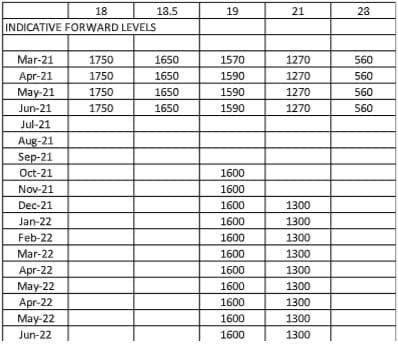