THERE was a slightly better tone to the spot auction and forward wool markets this week.

The auction sector again lost ground, mainly due to a poor opening Tuesday that saw most qualities come of 20 cents.

This is a continuation of the last three weeks, when prices have fallen to pre-Christmas levels, particularly in the broader microns. The stabilisation on Wednesday was as welcome as it was unexpected.

The ever-apparent stresses of financing, supply chain logistics, and overall global tensions were swept aside and the market found a base and closed the week on a positive note, although the passed-in rate did lift to nearly 20 percent.

The reaction on the forward markets was slightly better activity with buyers and sellers looking for some price certainty.

Interestingly, as illustrated in the chart below, the current nearby bid level sits precisely on the season average for 19 micron of 1680 cents (range 1613 cents to 1771 cents). 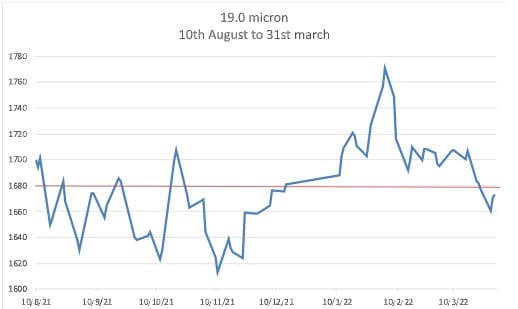 We expect to see the forward curve to remain flat through to the end of the season with a modest discount into the Spring and continuing into 2023 reflecting the current general risk assessment in most markets. 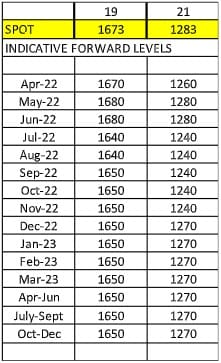