FORWARD wool markets fared better than the auction sector this week, as physical sales were again dominated by high passed-in and withdrawal rates.

With less than 30,000 bales selling, pricing the market is becoming increasingly difficult. The market was mostly 20 to 40 cents cheaper, but good style, low vegetable matter content wools were less affected.

Forward volumes remain frustratingly low, but there was a good spread of months from September through to February 2022. Most activity was in the 19 micron group, with prices 30 to 40 cents over cash out to Christmas and 70 cents over cash for the New Year, having traded at 1700 cents for January and February.

The forward curve has a different shape to it now. September, October and November are at best flat to cash. December, January and February have a premium of 2 percent and March to June a premium of 4pc.

We expect these premiums to hold into the early part of next week, but they likely come under pressure if the absence of positive demand signals continues to erode confidence. 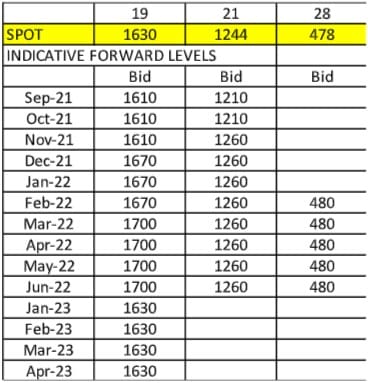