AUSTRALIA’S wool market edged higher this week under the weight of logistic and cash constraints, and global uncertainty.

The Ukrainian situation has triggered large moves in various commodity markets, with wool yet to decide if it will have a negative or positive effect on price.

Certainly, underlying demand appears to be solid. Once the supply chain returns to a modicum of normalcy it would be expected that price will firm. Given current developments the return to normal appears further away than ever.

Forward market buyers and sellers preferred to go to the sidelines than stick their neck out too far with current uncertainties. Buyers are remaining patient with solid bids down the strip for both 19 and 21 microns at a slight discount to cash. Sellers are patchy with a bit of interest by 18-micron producers to take some risk off the table with offers around the 2100 area scattered out to the end of the year. Early in the week there was some nearby hedge covering around cash levels that resulted in the only traded business for the week.

Focusing on 18 micron producers this week, there appears to be historical resistance around this 2200 area for spot prices (see chart). In the forward market, a similar pattern appears.

An analysis of forward trades over the last decade reveals that the 2200-2300-cent area tops out forward prices for any period greater than six months forward. That is, even though the spot price traded above 2500 cents for a period of time, the forward discount ranged between 200-300 cents for that time.

So even if we see the spot price break through resistance at 2200 cents, it is likely the forward market will slide into discount from the current flat structure. The way to manage the difficult psyche of selling forward at a discount is to work out your target sell/hedge levels for wool and place good-till-cancelled (GTC) orders in the market. If of sufficient size break the volume down to smaller chunks and have a scale-up strategy to average higher as the market continues to rally.

To predict ranges for next week is precarious given that there will four days before the auction recommences. Obviously, Europe and the world’s status may have altered significantly in that time.

The forward market should be the instrument that signals where price sentiment is heading over and above auction market trading. Unfortunately, the lack of liquidity from buyers and sellers robs the broader wool industry this important indicator. 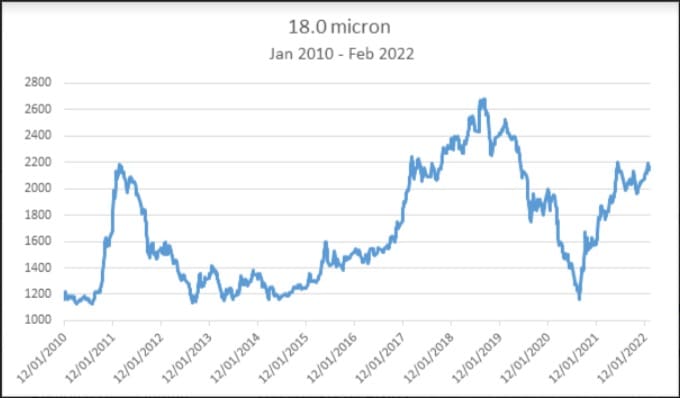