THE forward wool market traded in better volumes this week as the spot auction closed with prices regaining most of their losses of Tuesday.

The soft close to Fremantle last week and a more risk on attitude of the general commodity markets had buyers wary of the pipeline’s reaction to the recent price surge. The modest retraction on Merino wools of 5 to 25 cents was felt most by the broader merinos with finer than 19 micron virtually unchanged.

The forward market executed flat to cash for the early months out to the end of the season as the buyers evaluated the risk after the surge in prices last week. Anticipated better supply on the rally has buyers wary, but still wanting hedge some of their forward positions. Just as importantly, the interest was maintained through the spring and into 2022 with more than 60 tonnes traded at an average premium of 30 cents over spot cash.

The 19 micron contract traded at 1550 cents and 21 micron traded at 1280 cents from September 2021 through to January 2022. Bids into the early spring at this premium to cash were filled this week, but some residue demand remains for Summer and out to June 2022.

We anticipate that opportunity to hedge will remain through next week, with small premiums likely to be paid in the prompt window from March to June and better premiums into the new season and 2022.

Volatility is likely to remain with us as demand ebbs and flows on all commodity markets. Key drivers continue to be global sentiment around vaccine roll-out timeframes and its impact on economic recovery in our key consumer markets. 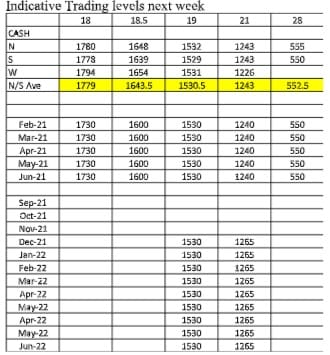