Forward wool market support as auction prices give up gains

FORWARD wool trading showed support at current levels as the spot auction market gave up around a third of its hard-earned gains this week.

This reaction sits neatly into the chartist’s models and comfortably with the supply and demand fundamentalists who have seen improved demand balanced by the increased offering.

This is borne out by the AWEX fourth quarter bale numbers that showed the highest offering at auction since 2007. All Merino qualities came back 50 to 80 cents at auction. The question is now what can we expect for the final two weeks of the season and into the spring and New Year.

When viewed in the longer-term, prices tend to be a little softer in the start of the new season. Historically, this was put down to the Spring flush of supply combined with the prolonged Northern Hemisphere vacation period, when Europe was the key production hub and driver of demand.

From 1980 to 2010 prices fell on average seven out of every ten years (June 30th compared September 30th ). The below table shows the trend continuing throughout the last decade with volatility at the beginning and end of the decade highlighting the potential risks.

From a forward market perspective, the bidding is indicating an initial level of support around current levels. Both 19 micron and 21 micron are bid flat through to June 2022, with pockets of slightly better demand in September and January.

We expect better volumes on the forwards next week with growers indicating a greater willingness to look for pricing opportunities. 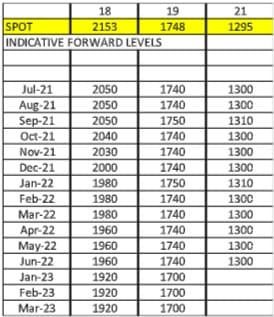