IT was a confusing and somewhat frustrating week for the wool forward and auction markets.

The auction market posted negative numbers to start the week, then finished the week with mixed results.

Most fine Merino qualities rose Wednesday, but this seemed a reflection of selection rather than an overall change of sentiment away from the risk adverse atmosphere of the last month.

The forward market continues to be priced with the suggestion of a revisit to more common basis differences. The chart below suggests a correction is overdue, with the current basis between 18 and 21 micron sitting at 850 cents (98th percentile). 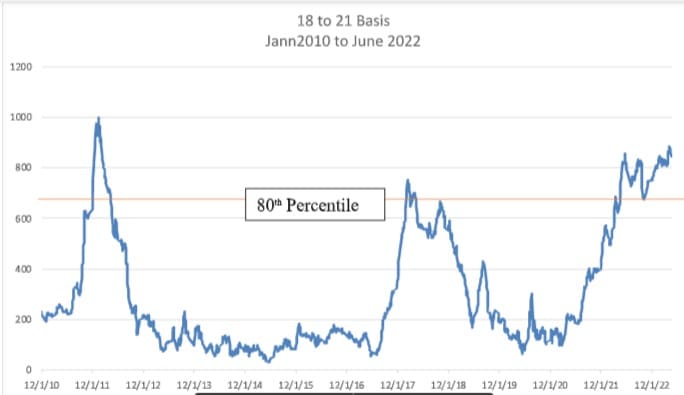 Grower interest dominates the Spring market, with September offered at 1705cents/October 1720cents/November 1700 cents and January 1705 cents. Buyers have been unable to coax levels offshore to enable them to breach the 1700-cent level for the last month.

The story is similar on the 21 micron contract, with buyers unwilling to break through 1300 cents and growers looking at fair value at 1320/1330 cents. This seems reasonable considering 21 micron cash at 1348 cents is only in the 55th percentile of prices for the last decade.

What for next week? Probably more of the same. Exporters will be looking to cover any sales, but demand is stifled by the overall logistic and general disruptive environment. Tighter supply will hopefully mitigate major negative movement.