THE wool forward market tended to ignore the machinations of the spot auction sectors this week by trading in a narrow range from May through to November.

The 19 micron contract traded consistently across the months and buyers seemed content to bid along the strip.

But growers were more interested in hedging into the new season with focus on late spring. Bidding is especially strong in the 21 micron category, with the October contract trading above cash (1280 cents) before closing slightly under at 1260 cents.

The spot market showed some short-lived resilience this week. Tuesday’s strong opening was soon tempered by the Wednesday market, with fine wool barely holding and the medium qualities giving up their gains.

More volatility can probably be expected going forward. Tight fresh supply into the winter will see irregularity, but the extent of the downturn in consumer demand remains the big unanswerable question.

This week, steadying of the spot market and flattening of the forward curve could be considered a formation of a price base. The more conservative view could be to see this as an opportunity to take some insurance into the spring and New Year. This calendar year was been marked by short sharp rallies followed by longer retractions.

The other interesting feature of the market at present is the basis between 19 and 21 micron in the spot auction sector, compared to the forwards. On Thursday after the close of auctions, there was a spread in the southern Micron Price Guide of 122 cents between the 19 micron MPG at 1398c/kg and the 21 micron MPG at 1276c/kg. This is an 18-month high.

The forward market sees this contracting to closer to the one year and two-year averages which are 50 cents and 60 cents respectively. This would suggest that for a grower looking to hedge into the spring and New Year, there is little to be gained in looking at basis and it’s better to hedge their predicted production micron.

Attached are a few historical charts as we move forward into more uncharted waters. The first indicates the market volatility and the second the recent uptick in the 19/21 micron basis. The final two price charts illustrate the magnitude of the price movements of recent years. 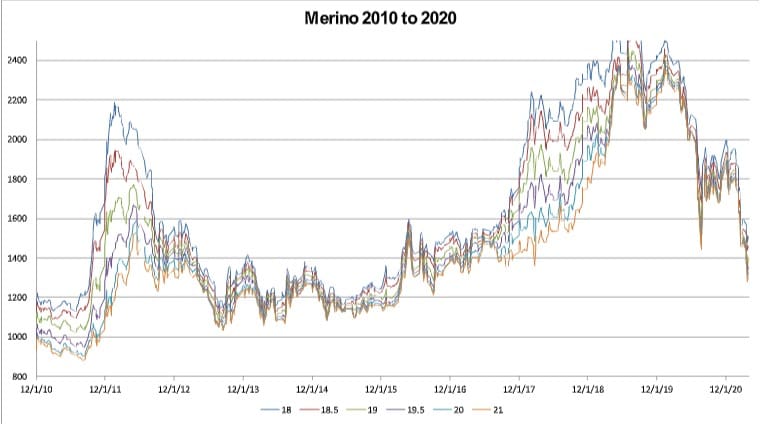