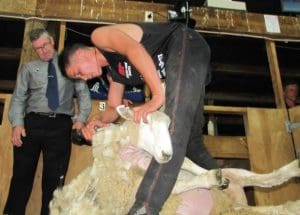 FORMER world champion shearer Rowland Smith rounded-off his preparation for his defence of the Golden Shears open title by completing a second consecutive clean sweep of the pre-shears weekend treble at the Pahiatua Shears on Sunday.

But the performance of a 14-year-old shearer at the event also took the crowd’s attention, when Taihape schoolboy Reuben Alabaster won the Pahiatua Shears junior final, marking him as a strong prospect to be the youngest shearer to win the prestigious Golden Shears junior title next month.

It was Alabaster’s second win of the weekend and is a strong prospect to become the youngest to win the Golden Shears Junior title – aged just 14.

The 2014 world champion won all three events last year before going to Masterton to win his fourth Golden Shears Open title, and has now won 36 Open finals in New Zealand in a row, his only blemish since the end of Janury 2017 being when he was a semi-final elimination at the Tauranga A and P Show six weeks ago.

The 2012 world champion, Taranaki farmer and Scotland international Gavin Mutch, was runner-up for the eighth time since winning the final at Tauranga, and reigning world champion John Kirkpatrick, of Napier, had his 13th top-three placing in a season which has yielded just one win.

But the gap has been closing, with Smith winning on Sunday by just 0.13pts. Smith needed the better combination of quality points to beat Mutch, who shore the 20 sheep in 16min 37.33sec; the first to finish by 15 seconds as the first five all shore quicker than anyone in last year’s Pahiatua final.

Smith, Mutch and Kirkpatrick are expected to be the first three favourites for the Golden Shears Open final when the TAB opens book, in addition to a Smith v The Field option which opened almost a fortnight ago.

The only change to calculation was the emergence Smith’s fellow world record-breaking brother Matthew, who was fourth. He was home from England for a short time to receive his Master Shearer award at the Golden Shears.

Woodville shearer Tegwyn Bradley had his seventh in win in his last eight finals to claim the senior title on Sunday, by just over a point from runner-up and Gore-based Lionel Taumata. There was a winning margin of just 0.34pts in the intermediate final won by Brandon Maguire Ratima, from French Golden Shears hope Jeremy Leygonie.

The Pahiatua Shears attracted 66 shearers to a Mangaone Valley woolshed south east of Pahiatua, a huge decline since the heydays of the 1970s when more than 200 shearers competed.

The 58th Golden Shears start in Masterton on Thursday and finishes on Saturday. They will be preceded by the pre-shears wool handling championships at Riverside Farm, north of Masterton, on Wednesday.