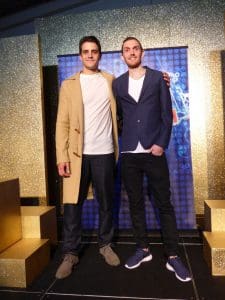 He also is believed to be the first male designer to win the award in several years and it was the first time he had worked with wool.

The young designer won the award with his winning entry in the streetwear/sportswear section — a mens overcoat matched with wool denim jeans and a tall T-shirt underneath. Toby said he was inspired by the fabric to make the overcoat.

“I had seen overcoats like that before and when I saw the fabric I just thought it would look good in that sort of length.

“Not a lot of people enter menswear, so I am passionate about menswear and streetwear in particular,” he said.

“It is so much softer than normal denim and it is quite light weight and it just feels really nice on your body.”

The win was “huge”, he said, and despite currently working on a private project designing bridesmaid dresses for a friend, he would be sticking to streetwear.

“When I was probably 13, I started skateboarding and I’ve been involved with skateboard culture, BMX, graffiti and stuff since I was young and it has just sort of carried through.

“When I started skating I got into hip hop and stuff like that.”

Toby believed streetwear has been under-represented on the fashion scene.

“When I first started fashion it was always about womenswear, dresses and stuff, and I always felt a bit out of place, but now I have got into my flow a bit and I’m happy to represent streetwear and design it.”

The major prize in the Ace Radio-sponsored young designer competition is the $10,500 Handbury award and scholarship, including the chance to attend a two-week residential summer course in fashion design at the Istituto Marangoni, Milan, one of Europe’s most famous fashion schools.

Toby said the trip to Italy was definitely an incentive to enter the award and he hoped it would help him achieve his goals of working with a leading designer and also eventually starting his own label. Although at 27, Toby said he has put his skateboard down, he commutes on a bike and remains interested in street culture.

“I’ve got a very strong interest in sustainable fashion and using natural fibres, going down the path of making good quality garments that are not causing harm to the environment.”

He was raised with two sisters at Port Noarlunga, a small sea-side suburb of the city of Onkaparinga, south of the state capital Adelaide. He travelled to Hamilton with his “thrilled” father Peter, a commercial painter, and mother Vicki, a former dress shop owner.

“I’ve always been a bit creative, I’ve been drawing and stuff for a while.

“It all sort of ties in, but I don’t think anyone ever really expected I was going to end up in fashion,” Toby said.

“Well done to all the students and teachers for their hard work.”

She said it was very exciting to have wearable menswear designs in the award.