“Not a bad for a pastry cook and a truck driver.

“I was bloody rapt, I cried, that one was for my late father-in-law, Laurie ‘Chips’ Menzel, he died two years ago and I took his farm on.”

She said the season has been perfect, although a bit more sunshine would have done the lambs “a world of good.”

“We had no grass in Winter and now we’ve got too much.” 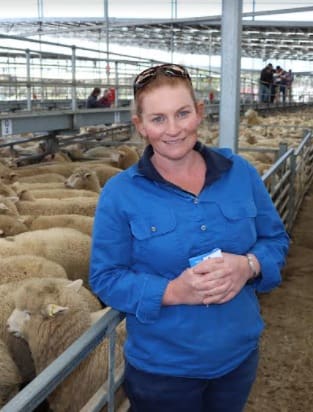 Jess Menzel with her $302 lambs at the Hamilton saleyards today.

Jess said she sells about 2000 lambs a year, mainly bred by crossing Poll Dorset rams over the ewe progeny of a White Suffolk-first cross ewe crossbred. For the last few years she has been buying her Poll Dorset rams off Lachie Kelly at Hexham who took over the former Claronden stud from Aaron Pascoe at Caramut.

“I reckon they are doing the job,” she said.

Lanyons auctioneer Warren Clark said the lamb turn-off was normal for the region.

“Then we’ll do the first two weeks in December which are going to be the big ones, two 60s, I would imagine.”

He said the quality of the offering was excellent for the top to middle end of lambs, down to the the smaller lighter lambs still lacking in sunshine. Restockers paid to $177 for light weight new season lambs in a market that was very strong to be firm to slightly dearer in places for most categories, apart for the very light lambs sold back to the paddock that were $5 softer. Light 12-16kg new season lambs made $127-$158 with most going back to the paddock. Trade weight 18-22kg lambs made $148-$194 and medium 22-26kg trade lambs sold from $192-$266, averaging around 800-880c/kg cwt. Heavy lambs over 26kg made to $302 to average from 900-950c/kg cwt. Heavy shorn lambs averaged around 800-900c/kg and hoggets made to $226, the NLRS said.

Mr Clark put the strength of the heavy lamb prices down to the quality of the Hamilton lambs and the recent rainfall in the north.

“I would say they just can’t get stock out at the moment, and whether this is a flash in the pan or not ….,” he said.

“What we are seeing, and for a long long time, is the price per kilo of export lambs outstripping trade lambs.

“We have every buyer in Australia here today, no-one is really holding back it was a pretty even field, they are all having a dip.”

JM Ellis and Co auctioneer Jack Hickey said prices for most categories of lambs are as strong or stronger than last week and especially the heavy lambs with 26-27kg-plus lambs making the big money up to $302.

He said the massive rains in the north might lead to a renewed focus on southern lambs by buyers.

“Weather like this is what we need, but we don’t want it to getting too hot because there is a lot of (wool) length in lambs and I’m a little bit worried that as soon as we get a hot week the lambs may bake a touch.”