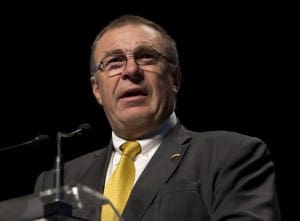 But he and two current AWI directors who want to be re-elected – AWI chairman and NSW wool grower Wal Merriman, and David Webster from WA – must still receive more votes for their election than against it to be successful in obtaining one of the three seats available.

Mr Laurie is aiming to replace director Brian van Rooyen, who is not standing for re-election after serving on the AWI board since 2002.

AWI announced today the board candidates who have met all requirements for nomination. Mr Laurie achieved the necessary 100 valid shareholder signatures to nominate for the board as verified by the AWI share registry managed by Link Market Services.

Mr Laurie’s family produces wool, prime lambs and beef at a Walcha district property. He was president of the NSW Farmers Association from 2005-2009 and leader of the National Farmers Federation from 2010-2013. Mr Laurie was also NSW’s first Land and Water Commissioner in 2012 and in 2013 he served on the AWI Board Nomination Committee.

The AWI constitution stipulates at least a third of the board, currently made up of seven members, must retire their position every two years. Incumbent AWI directors Wal Merriman and David Webster are retiring, but will stand for re-election for their seats which become vacant at the 2015 AWI annual general meeting in Sydney on November 20.

AWI chairman Wal Merriman thanked and paid tribute to Mr van Rooyen, saying he had “brought significant experience, insight and business acumen to the AWI board over many years and the board wishes him well in his future endeavours.”