A VETERAN fencing contractor says the return of netting fencing is revitalising production options in inland areas, but warns in some cases poor construction and inadequate maintenance standards may be limiting the potential benefits. 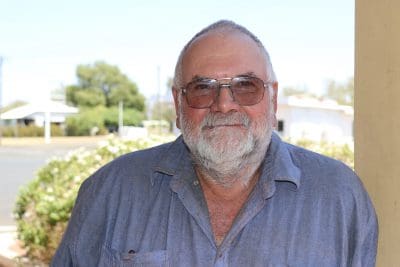 Brian Newman has worked in the Surat district of western Queensland for the past two decades, replacing hundreds of kilometres of World War II era dog netting with new barbed wire fences for cattle. The trend reflects the shift away from sheep that has occurred on many properties following the prolonged wool downturn that began in the early 1990s.

Before he retired from full-time fencing a few years ago, Mr Newman established some of the first of the new wave of predator-proof netting fences that are now common sight throughout the district.

The new fences, some of which have been partly subsidised with government funding, are helping landholders regain the upper hand in the fight against wild dogs and facilitating the return of sheep to many properties in the district.

Mr Newman said some of the new fencing he has seen go up in recent years has been of a very high standard, but not all.

In some fences, end assemblies were already lifting out of the ground only a few years after construction.

Mr Newman said common mistakes included not putting end-assemblies in deep enough and not enough longer posts in the line.

While it was possible to get away with longer distances between heavy posts in harder red country, black soil country needed them to be much closer and driven in deeper.

He believes that cementing posts in the ground is not effective, pointing out that the concrete tends to lift up with the post out of the ground.

He prefers to used drill pipe, steel tubing with a 7 mm wall, that is buried deep.

“It is extremely strong, you can give it a terrible belting, and you will punch it down through a lot of stuff,” he said.

“Six foot above the ground, eight foot in the ground, rammed with a post driver, they’re not going anywhere.”

Mr Newman said exclusion fencing was a big investment that needed to be maintained regularly to deliver full benefits.

He advises checking fences once a week to ensure they are maintained and kept in good order.

“Lay a piece of pipe in buffel and see what happens to it in 12 months.”

Grabbing retirement by the horns Mr Newman is no longer fencing full time but keeps busy polishing and mounting cattle horns for sale to people around Australia. 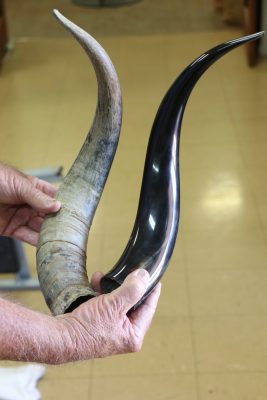 The difference between a polished and unpolished horn from the same pair.

Cattle with large horns have been largely removed from the Australian cattle herd in recent decades through dehorning and breeding of polled cattle to reduce the incidence of bruising and potential injury to animals and people.

However, Mr Newman has a large stockpile of horns he acquired from various sources in Northern Queensland some years ago and is now slowly working through the collection.

Once a common site on walls around Australia, he said the mounted horns he sells are proving popular with people all over the country.