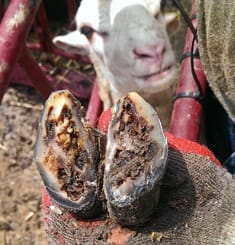 Virulent footrot has been diagnosed in the New South Wales’ Central West, the first time in decades the notifiable disease has been reported in the region.

Areas such as Coonamble, Narromine, Warren, Nyngan and Gilgandra have not seen the notifiable disease in decades, which may come as a nasty surprise to some graziers.

Signs of footrot include lame sheep, inflammation between the digits and underrunning of the sole and heel of the foot.

In some severe cases sheep will lie down, walk on their knees and lose weight.

“Our District Veterinarians and Biosecurity staff work hard to maintain the state’s footrot protected status, so when footrot is diagnosed, we take immediate action to limit its spread and trace the source,” Dr Kelly said.

“This can generate an immense amount of work and involves checking many additional properties for signs of the disease as well as past stock movements.”

Properties diagnosed with footrot are quarantined and a plan is written to eradicate the disease.

This can include destocking or foot bathing, paring and inspecting sheep until the disease is gone.

“It is likely that the increased prevalence of footrot in our district is due to people buying in sheep with footrot and has been exacerbated by the prolonged wet weather,” Dr Kelly said.

Virulent footrot is caused by the bacteria dichelobacter nodosus.

In New South Wales it is notifiable under the State’s Stock Diseases Act 1923. This means any landholder, land manager, agent or vet who suspects that footrot is present in a mob they have seen is legally obliged to notify a District Veterinarian as soon as possible.

Failure to notify will result in regulatory action being taken. NSW maintains a footrot protected status, meaning that the flock prevalence of footrot in the state is less than one percent.

“All producers are encouraged to be vigilant when trading sheep or goats, ensure they are buying from reputable sources and request and examine closely the sheep health statement before the sheep arrive on farm,” a NSW LLS statement issued this morning said.

“It is a good idea to isolate newly introduced sheep or goats, and ensure they are healthy with no signs of lameness before introducing them to the main mob.

“All producers should also concentrate on keeping fences in good sheep-proof condition to ensure straying sheep are excluded. If you witness lame sheep or any other signs of footrot, call your nearest Central West Local Land Services District Veterinarian.”