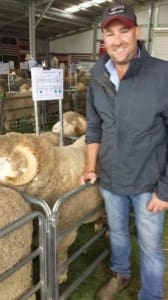 Identification and reporting of a potential Foot and Mouth Disease outbreak might be difficult for many Australian livestock producers, according to a NSW woolgrower and beef stockman who completed an FMD training course in Nepal.

Southern NSW woolgrower and stockman Alex Wheelwright, 30, said the difficulty in identifying FMD would put pressure on farmers’ identification skills and eventual reporting of suspicious disease symptoms in the event of an outbreak in Australia.

FMD easy to recognise in cattle, harder in sheep

Although the disease was easy to identify in cattle, due to symptomatic drooling, he was concerned that many sheep producers might be dismissive of FMD-like symptoms by attributing them to footrot, scabby mouth or foot abscess. Unfortunately he was not able to observe the disease in live sheep, but only through photographs.

“Identification was probably the hardest thing, because it is quite similar to footrot and scabby mouth.”

Identification of FMD was a lot easier in cattle than it is in sheep, he said.

“We saw it in water buffalo and in cattle –the infected cattle drool like there is no tomorrow.

“Probably the scariest things are that I don’t think it would be picked up quickly in sheep and the way that it spreads,” he said.

“The disease itself isn’t as bad as Ovine Johne’s Disease in terms of loss of production, but then because we are exporters it would destroy us.”

FMD transmitted by any livestock secretion and via humans

The Food and Agriculture Organisation of the United Nations said FMD is a highly infectious viral disease that causes liquid-filled blisters on in animals’ hooves, in and around their mouths, noses and teats.  All secretions of sick animals are infectious and people can transport the virus via their hands, clothing and shoes. The virus can survive for extended periods in cool conditions off animals, and in bone marrow and animal products.

Alex said FMD lesions appearing at the top of sheep hooves might be dismissed by some farmers as due to foot abscess, footrot, scabby mouth or just general lameness.

“The lesions in the mouth aren’t actually easy to pick up unless you are mouthing them.

“Also the symptoms only last for 10-15 days and then they get over it.”

The training course in Nepal in September was co-funded by WoolProducers Australia. It showed Alex the importance of Australian farmers being able to recognise FMD-like symptoms and report them to a government or private veterinarian. He urged farmers who have any doubts about suspicious disease symptoms in their livestock to report it and get advice from a veterinarian or animal health officer.

But Alex also said there was a need to distribute FMD identification photographs to farmers at field days, livestock sales and industry events.

“That’s why early detection is so important.”

Alex said traceability of livestock would also be important in the event of a FMD outbreak, but he believed the current mob-based National Livestock Identification System for sheep was good enough.

“The main thing is that if it is picked up so then you can trace back to where it came from.”

Most producers know where there sheep are going and what is happening with them, he said

“I don’t know if electronic identification of sheep is going to improve anything.”

Alex Wheelwright works in the family business running 7000-9000 Grassy Creek-blood Merinos and prime lamb mothers on 1800 hectares near Crookwell. He also works with several cattle operations in the area, and all without the help of a single Kelpie or Border Collie.

WoolProducers Australia recently strengthened its commitment to Foot and Mouth Disease (FMD) preparedness on behalf of the Australian wool industry by co-funding 10 industry positions with the Department of Agriculture for real-time training on FMD in Nepal. Trainees learn how to recognise and report FMD symptoms to assist Australia’s early warning and response capacity. WPA has sent wool producers, agents and private vets from all sheep-producing states in Australia as part of this funding round.

Alex said as someone who handles livestock on a daily basis the opportunity to observe FMD lesions first hand has been an invaluable experience.

“Coming from a production background enabled me to provide practical input into the scenarios that we encountered, which in the event of an outbreak in Australia will be just as important as the technical advice.”

The FMD courses are designed for producers, stock handlers, private and government vets and animal health policy makers, and are delivered by the the FAO.

“FMD is something that all producers hear about but this training has enabled me to think about what an outbreak would actually mean in an Australian context.” Mr Wheelwright said.

“The course opened my eyes to the wider policies surrounding an FMD response in Australia and how they will impact not just on-farm activities but the whole livestock supply-chain, including the devastating implications for trade.”