Flooding forces sheep and cattle movement in NSW and VIC FLOODING rain across large parts of Victoria and southern New South Wales is continuing to create a logistical nightmare for livestock producers with animals being moved off some properties.

Grain and forage crops are also expected to take a battering, with some crops soaked by slow moving floods and downgrades on the horizon.

The State Emergency Service in Victoria this morning issued a number of emergency, evacuation, major, moderate and minor flood warnings across the north of the state.

Evacuation orders were issued for Echuca and the Echuca Village, and the communities of Bunbartha, Kaarimba, Mundoona, Zeerust, Coomboona, Mooroopna North, Shepparton North, Tallygatoopna and Under.

Emergency warnings and recommendations to move to higher ground were issued for the Campaspe River downstream of Rochester, the Goulburn River at Kialla West, Mooroopna, along the Loddon River from the Loddon Weir to Kerang, Orrvale and Murchison.

Major flood warnings were issued for the Avoca River to Charlton Town, along the Goulburn River from Seymour to Shepparton, around the Wimmera River at Horsham, the Goulburn River south of Murchison, along the Campaspe River from Barnadown to Rochester, the Murray River downstream of Tocumwal, the Loddon River from Laanecoorie to Loddon Weir and upstream of Laanecoorie, and downstream of Kerang and the Bendigo and Bullock Creeks.

Moderate flood warnings were issued for the Broken River downstream of Casey Weir, Quantong, around the Tyrrell and Lalbert Creeks in the Wycheproof and surrounding areas, and along the Wharparilla-O’Dwyer Road.

Farmers forced to move livestock out

In a microcosm of what is occurring across northern Victoria and in a repeat of what has already occurred across parts of New South Wales, Sheep Central and Beef Central correspondent Murray Arnel has described what flood waters have done to his small farm south of Echuca.

Standing in rubber boots with just four inches of clearance and carrying a shovel as a depth gauge, Murray was attempting to get the last of his sheep clear of advancing flood waters. See below Murray’s first Facebook post two days ago.

His property is located at the border of the Strathallan and Koyuga areas on the Nanneella flood plain, about 12 kilometres south of Echuca beside the Kyabram-Echuca Road.

He has had 100mm of rain in the last week and a drainage channel at the back of his place that runs into the Deakin Drain and into the Murray River has been running to capacity on the local rainfall before further flood water arrived.

“In the flush that came out of the Campaspe River, I believe the Eppalock Weir is running at about 120 percent and the damage that’s been done up through the Axedale area below Eppalock is quite pronounced.

“That has come down the river and swamped all of Rochester and television reports said that only eight houses survived getting water in them,” he said.

With the help of his Echuca Elders agent, Matt O’Connor, arranging agistment and a truck from Deniliquin, they trucked out 200 ewes to Perricoota, and 350 weaned lambs and 150 Merino wethers to Mathoura over the weekend.

“We were walking around at the height of it with water up to our crotches, that’s how deep it was in places.

“I’ve just had the opportunity in the 6-8 hours with the water dropping 4-6 inches to be able to get sheep out that we couldn’t get out the other day (Saturday).”

He has another 150 to move out of the way of an expected lift in water levels after rain expected later this week. Some sheep had been stuck on a channel bank after their paddock went 50cm under water.

Murray said a neighbour has had to shift his dry dairy cows and heifers through water higher than the front wheels of their tractor.

“All the guys that have lived around here are telling me that this is totally unprecedented and it sounds as if it is going to be prolonged.” 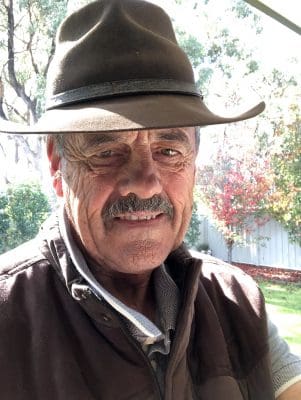 Murray estimates he has 30-40cm of water across a large of his 70 hectare property that is set up as an irrigation farm with a recycle dam and only an emergency outlet or “plug hole” to drain excess water.

“I reckon there is water covering 60 of the 70 hectares and I’m guessing it is somewhere between about an average 9-12 inches high across it.

“And once the water stops flowing into it from upstream and it stabilises, I reckon I will have, in old terms, about 150 acre feet of water that I’ve got to get out through a 15-inch pipe,” he said.

“This farm could take three weeks to drain once the water subsides, without putting pumps on.”

Murray agreed his experience would be repeated on other farms throughout the flooded areas in the region. He said the water is all travelling towards the Murray-Goulbourn River junction.

“So you can imagine what hope there is of the water getting away quickly.

“So it’s going to be ugly for a long time.

“This is going to replicate itself as it goes down the river,” he said

“God knows what it is going to be like when it gets to Mildura, by the time the Murrumbidgee joins up with the Lachlan, and into the Murray and the Edward River joins back up with the Murray.

“By the time all those waters meet it’s going to be a problem.”

Murray said one problem has been with flood waters getting into the Waranga-Mallee Channel out of the Goulburn Weir at Nagambie that led to water pouring into other irrigation channels with the result that “the river was pushing those channels backwards”.

“So there has been water flowing where it has never flowed before.”

Elders agent Matt O’Connor said agents across the region have had to move thousands of livestock off farms.

“Sheep, cattle, goats, horses and all the creepy crawlies in between.

“It’s been a huge effort by all the trucking companies and certainly that has anything to do with livestock, their welfare is paramount,” he said.

“The guys who are able to take stock have been fabulous.”

Matt said any landholders who are able to help out with agistment should contact an agent in the area.

“I think we will still need places to go with them.”

Matt said the region is potentially looking at another six weeks of similar weather patterns.

“They’re talking another 80-100mm here on Thursday and Friday. We’ve got a long way to go.”

Scope for market to improve

“It’s been really hard to move cattle, transporters have been struggling to get into some places,” Mr Barton said.

“While it has been disruptive I haven’t seen it have a major impact on the market around her.”

Mr Barton said feedlots seemed to be keeping up their numbers, with most of the local yards full.

“A lot of feedlots around here are keeping their supplies up, it is still three-to-four weeks to get cattle into a feedlot,” he said.

“I suspect some of those feedlots in Victoria might be having some more issues with access. In general, I think there is scope for the market to improve off the back of this event.”

Similar sentiment was echoed by StockCo business development manager and Beef Central/Sheep Central columnist Chris Howie, who said logistics was the main issue. He said there could also be some problems in the prime hay growing areas.

“I drove past a lot of hay paddocks yesterday and I think some of them will be having issues,” he said

“Some of the export hay could be downgraded, which would still be used as feed hay domestically. Accessing paddocks is going to be a big headache for grain and crop guys as well.” Plenty more rain is expected in the next week. Map: Bureau of Meteorology

The Bureau of Meteorology is forecasting more rain in the affected area over the next eight days, with many areas expect to receive up to 100mm.

A high-pressure system off the NSW south coast directing humid tropical air into New South Wales, as a low-pressure system approaches from the west. The low is forecast to bring significant rain from Wednesday to Friday before weakening but will be quickly followed by another rain-bearing system on the weekend.

Already sodden areas of Qld and Northern NSW are also expected to be in the firing line, with more than 100mm expected in parts.

In an update this afternoon, Victorian Premier Dan Andrews said 81 schools remain closed in northern Victoria and VCE assessment criteria was being revised for affected students.

There are also 1500 properties, mainly around Mooroopna, still without power.

Mr Andrews outlined details of the $351 million assistance package announced yesterday, including $2000 payments for families forced out of their homes by flooding, accessible on [email protected]

He said there also Emergency Re-establishment Payments of $42,250 for affected households. 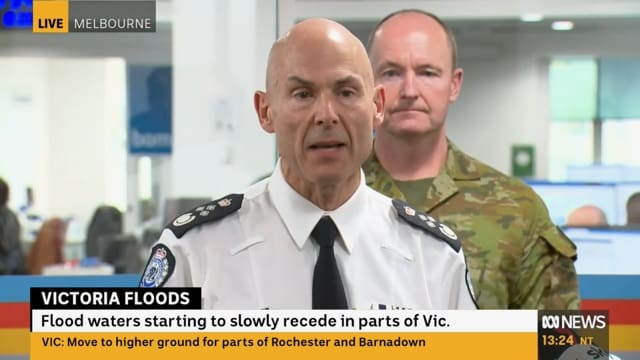 Emergency Management Victoria Commissioner Andrew Crisp said there were evacuation orders out for Echuca, Barmah and Bunbartha, but no longer for Charlton.

He said there had been more than 700 flood rescues and more than 7000 requests for help to emergency services since flooding began. Additional boat crews were coming from South Australia.

Australian Defence Force Brigadier Matt Burr said more than 200 ADF personnel were assisting and this would be doubled to 400 and two more helicopters would join aircraft already in use. 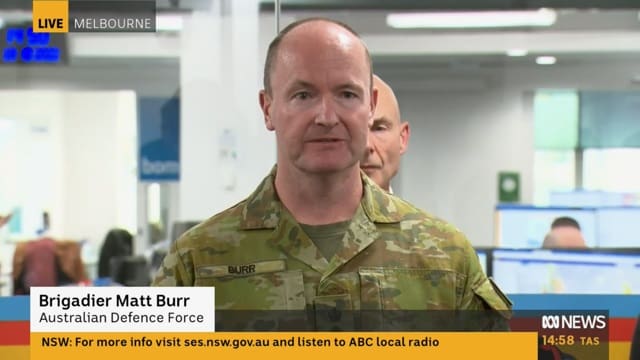