Fletcher’s meat back on rail after horror month for logistics

A MAJOR sheep meat abattoir in central New South Wales has its products back on the rail after a horror month of landslips and derailments caused by widespread flooding.

In the past fortnight, almost all access to Sydney was cut for Dubbo-based Fletcher International Exports, which sends most of its product through Port Botany. The company is one of the country’s largest sheep meat exporters and normally sends four trains to Sydney per week.

The Hunter line has been flooded at Maitland and a landslip at Blackheath has closed the rail through the Blue Mountains for the past fortnight. Both lines reopened this week, with the first Fletcher’s first train heading out in recent days.

Director Roger Fletcher said he was hoping to have trains going through the Blue Mountains at the start of next week.

“We are preparing some big trains to head to the port, we do some that are 1.3 kilometres long,” Mr Fletcher said.

“There’s been huge problems with the weather, everyone line has been buggered and there are still some issues. We also export grain and cotton, which has just finished picking so there is a lot of traffic heading to the port. 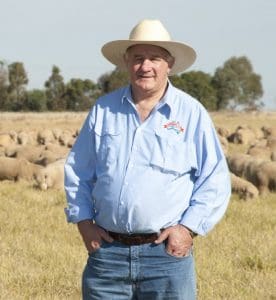 “But if we can get back over the blue mountains next week, will start to track well after that.”

“The seas have been that rough they can’t get the ships into the port,” he said.

“When shipping runs well we don’t have any cold stores in Australia, but most of the cold stores are full at the moment.”

Mr Fletcher said the company had been navigating the logistical issues by doing maintenance and putting some freight on the road.

“Filling up cold stores and sending trucks to the port is all you can do in this situation,” he said.

“But freight is what takes the tonnages, putting 100 trucks on the road is peanuts and we don’t even have the trucks available at the moment.”

Mr Fletcher said the freight logistics was contributing to uncertainty in the industry, with many also concerned about Foot and Mouth disease.

“The last two or three weeks have been a disaster, because our customers have been getting product late – it just seems like you fix one problem and another one comes up,” he said.

“There’s still going to be a congestion of stock with everyone worried about FMD. But I don’t want to alarm anyone, because the season has been good and if we can wait this period out we will be going well.”