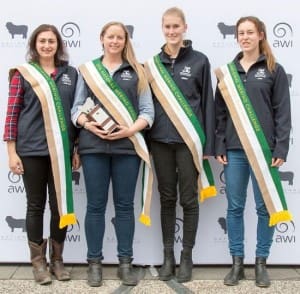 FIRST-TIME entrants excelled at Australian Wool Innovation’s National Merino Challenge in Sydney, highlighting the role the event is playing in extending industry skills and opportunities to agricultural students from rural and city backgrounds.

After its fourth year — the first outside its pilot phase – AWI said the NMC has educated more than 360 secondary and tertiary students.

NMC project manager Ben Watts said NMC has grown as early participants have realised its networking and career value, attracting more students and lifting the number of teams, especially in the tertiary section, where 95 students competed this year.

He said the number of participating students has risen from about 100 last year to more than 140 this year.

Students compete in activities relevant to Merino sheep production, including visual scoring of sheep, condition scoring, use of Australian Sheep Breeding Values in ram and ewe selection, wool typing and valuing and feed budgeting. They also attend an industry dinner and network with industry professionals, university and secondary students.

Last year’s addition of a Careers Panel was broadened to seven panellists this year, providing students with more insight into industry job options. AWI said the aims of the NMC are to introduce students to sheep and wool industry career opportunities and to offer basic skills in sheep management and appraisal, using traditional and modern methods.

With a growing list of sponsors and continued growth in participants every year, the challenge has quickly established itself as a leading education program for young students interested in a career in the wool industry, AWI said.

AWI manager of woolgrower extension and adoption Emily King said the NMC had grown rapidly since its inception because it met the demands of a new generation.

“There is a strong wave of young people coming through who are increasingly enthusiastic about the wool industry.

“These are the young minds that will take the industry forward with new ideas and new leadership. It’s exciting to see and great to be involved,” she said. 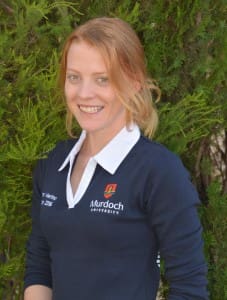 Participating schools and tertiary institutions this year included 20 students from Western Australia. Murdoch University student Kristy Walters, 20, was the individual winner in the tertiary section as a member of the first NMC team from the institution. Kristy’s family has a Merino wool and cropping operation in WA’s wheatbelt near Brookton.

She said the challenge was “a good wake-up call to see what I’m studying for — like what is the end goal.

“It was a nice transition from the final year of university to getting inspired to be in the workforce next year and seeing what it is all about.”

“I love the hands-on work and having a hard day.

“I’m torn between cattle and sheep, but I think after the weekend I’m definitely starting to lean towards sheep.”

Kristy said the best part of the challenge was the careers panel where seven speakers told their stories about entering the workforce and gave tips on approaching potential employers.

A student from the WA College of Agriculture at Narrogin, Lauren Rayner, placed second in the tertiary division after giving the top performance in the production section. Kristy said Lauren also came from Brookton.

“The families know each other and everything so was strangely coincidental that we both came home with some good results.” 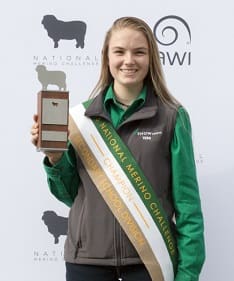 The top secondary school competitor was the highest scoring competitor in the breeding section, Year 12 student Tessa Runting from the Woodleigh School at Langwarrin South, south-east of Melbourne in Victoria. Another member of the school’s first team to compete at the NMC, Year 11 student Ella McCarthy, was the top performer in wool section of the secondary division.

The school’s director of community relations Adam Liddiard said Tess and Ella, like the other members of the team – Year 11 students Ash Purcell and Kaya Grocott – were not from farms, but were active in the school’s well-developed sheep showing and farm program. The team was trained by agriculture teacher Shona Janky, continuing the work of former teacher Charlie Clarke, whose vision was for the school to introduce city kids to agriculture and break down the rural-city divide.

“It was a fantastic result for their first visit to that competition,” Mr Liddiard said.

A University of Melbourne team won the tertiary team section for the first time in three years of competing. 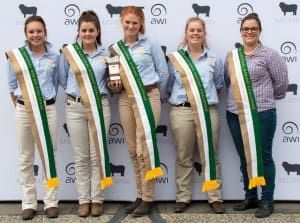 The winner of the secondary division team award was the Yanco Agricultural High School, with Deanna Johnston scoring third place in the individual scoring. The other members of the team trained by agricultural teacher Ellie Quinn were Claudia Kuerschner, Lara Mitchell and Stacey Gardiner.

Team trainer and agricultural teacher Ellie Quinn said it was first challenge for the Year 12 team members, but the third secondary division team win for the school, after success in 2013 and 2014 with other teams. She said the importance of the challenge was building.

“I think in particular the fact that the students actually get a chance to use tools that are designed for commercial producers gets them out there.

“But probably one of the most valuable parts of it is that the students get to network,” she said.

She two of her students found courses and activities they wanted to do — a pregnancy scanning course and helping a sheep breeder with an artificial insemination and embryo transfer program. The students get to network with university students, talk about courses and get information on industry career options, she said.

“The Careers Panel was particularly valuable.”

Former member of the winning 2015 Charles Sturt University team and now a territory manager with veterinary pharmaceutical company Vetoquinol in NSW, Brooke Cowan, said the NMC was pivotal to her career.

“The NMC gave me the perfect introduction to the industry and some of the key skills required.

“At the end of the weekend, I knew this was the industry for me and I had the confidence to then pursue employment within it,” she said.

“It’s a choice I am very pleased to have made.”

The 2017 National Merino Challenge will be held in Melbourne on May 27 and 28.