AuctionsPlus sold 68 percent of the 6621 lambs offered, with 20pc not receiving bids and 12pc being passed in.

Most of the offering were second cross mix sex lambs, with the top price being $119 for six-month old 46kg lwt woolly lambs from Yass with a 60mm fleece.

First cross maternal ewe lambs sold to a top price of $120.50 for seven-month-old 37kg lwt lambs from Kingston in South Australia. One line of 8-9 month-old 38kg lwt Merino wethers from Euroa sold for $65.

Landmark Benalla agent David Welsh said the sale result was probably a reaction to the state of the current slaughter market with the producers not allowing for that in their store lamb pricing.

“Yet there were some store lambs that sold very well, particularly lambs that were well-prepared and background, and had had a bit of grain.

“We offered three lots and they all sold – I thought they sold quite well.”

Delta Agribusiness agent at Cootamundra Adam Randall said his two lots sold fairly well in the sale and over their reserves.

“Compared to the week before we were a tad under where the market was in the weeks prior to that sale, especially with processor input.

“But then as of last week, with the way the dry set in and the processors pulled the rug out of the market, it actually ended up being a pretty good result for the week,” he said.

Mr Randall said some clients could not wait for prices to improve due to the season and water issues.

“A lot of blokes still haven’t got any water, it’s pretty tight out there.” 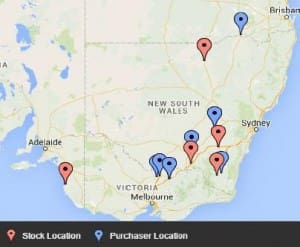