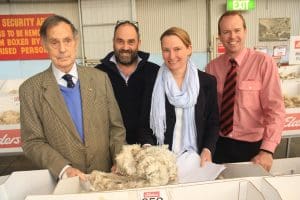 FINE wool producers like the Lawrance family at Vasey were happy with the improved 16-19.5 micron prices in the Australian auction market this week.

Rob and Georgie Lawrance sold 16 bales of 16.5 micron 6-7 months shorn wether fleece wool and pieces through Elders in Melbourne this week for an average of $3230 a bale.

“The bale average was exactly what we paid at Sheepvention for rams,” Mr Lawrance said.

The fleece wool had an average staple length of 63mm with a tensile strength of 38Newtons/kilotex. The Lawrance flock is based on Stud Park South and Salt Creek blood. They lamb in spring and autumn, using fewer but better quality rams over more ewes in their operation.

Mr Lawrance’s father Neil said the current extended run of higher wool prices is more significant than when wool was worth a pound in the 1950s.

“It was very nice for a while, but it came and seem to go off very quickly.

“This a tremendous boost and the Chinese market has arrived in a big, big way.”

“The buying approach could best be described as cautious, as buyers attempted to gauge the market.

“The lack of buyer confidence resulted in general losses of 10 to 40 cents, with wools coarser than 20.0 micron most affected,” he said.

But Mr Plunkett said the downward direction of the market was short-lived and buyer confidence returned on the second selling day, continuing unabated to the final lot of the Fremantle sale.

“Main buyer interest was focussed on wools 19 micron and finer, pushing these types up by 40 to 90 cents for the series.

“The coarser microns did not fare as well as their finer cousins, in Sydney and Melbourne 21 micron and coarser fell by 10 to 30 cents for the week,” Mr Plunkett said.

Crossbred prices fall by up to 90 cents

The crossbred sector suffered price corrections this week on the back of reduced demand. The 26-28 micron wools were most affected, dropping 50 to 90 cents, Mr Plunkett said.

A limited selection of 32 micron wools managed to hold up well, recording little change, he said.

“Locks, stains and crutchings all rose for the sale by 15 to 30 cents,” he said.

This was reflected in the three carding indicators rising by an average of 20 cents.”

The wool offering will reduce next week, with currently 37,290 bales on offer.

Elders southern zone wool manager Lachie Brown said the auction market started slowly early on the medium Merino wool on Tuesday, but regained ground and finished strongly on fine wools. He said the Chinese indent buyers are driving the market, along with topmakers.

With the bale offering this week there was an expectation that prices would come back 30-50c/kg clean, Mr Brown said. But with the offering next week expected to be in the low 40,000s next week and down to the mid to low 30,000 bales by mid-August, he expected the supply situation to become a factor for buyers. Also the Western District has had a pretty tough summer and then a break, raising the potential for more tender wool.

Processors and exporters are concerned about the fine wool supply situation with the tough season and increased slaughter of sheep, he said. Mr Brown said the amount of wool coming out of New South Wales and South Australia pastoral areas is expected to up to 50 percent less in coming months.

“That’s what we are hearing from our network staff and that will feed through into the offering here.

“It is starting to filter through how serious the situation is in those areas and therefore supply is going to be the real issue come September-October.”\