The proportion of fine wool produced in Australia’s clip is expected to fall in 2014–15 with overall production expected to hit its lowest point on record, according to ABARES’ September quarter Agricultural Commodities Report.

This would follow more positive seasonal conditions during autumn and winter across the southern parts of the country, the report said.

“The overall quality of fine wool is expected to improve, which will also place upward pressure on fine wool margins,” he forecast. 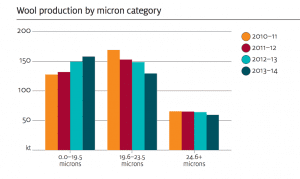 Mr Leith said drier seasonal conditions in 2012–13 and 2013–14 in many producing regions resulted in a greater share of fine wool produced than in previous years.

Fine wool has traditionally attracted a higher price than medium and broad wool and is typically used for higher-value textiles and apparel.

“However, increased supply in recent years has caused the price margin on fine wool to fall, relative to broader wool types.

“During the four weeks before the July 2014 auction recess, the price of 19 micron wool averaged just six cents a kilogram more than that of 23 micron wool,” Mr Leith said. 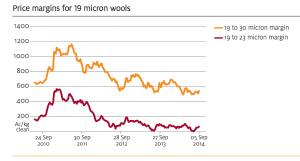 Mr Leith said the margins on fine wool relative to medium and crossbred wool are low by historical standards, but that trend is expected to reverse in the short term.

“The supply of drought-affected wool has been relatively high over the past few seasons, putting downward pressure on fine wool prices.

“Furthermore, the poor quality of fine wool may have contributed to lower margins.”

“Wool production and supply are forecast to decline, but limited demand growth in key textile and apparel markets is expected to constrain upward pressure on prices.

“Slowing income growth in China and delayed economic recovery in the European Union are expected to prevent significant growth in retail sales of wool apparel and textiles.”

Shorn wool production will lose out to meat options 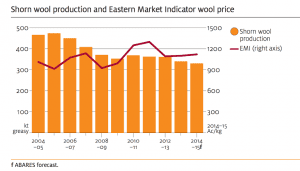 ABARES is expecting shorn wool production in 2014-15 to fall by about 4pc to 328 000 tonnes — the lowest production year on record.

“The reduction in the Australian sheep flock during 2013–14 is expected to lead to fewer sheep shorn during 2014–15.

“Growth in the lamb price relative to the wool price in late 2013–14 is expected to result in a reduction in the number of purebred Merino wethers in the national flock,” Mr Leith said.

Producers are expected to opt for greater numbers of crossbred and specialty meat sheep for breeding, causing average wool cut per head to fall.

Wool exports expected to fall 5pc, focus on US

ABARES expects China to continue as the major importer of Australian wool – taking about 75pc. In 2013 Chinese exports of apparel and clothing accessories to the United States were valued at around US$28.2 billion. US imports of wool apparel from all destinations increased by 8pc in the first six months of 2014.

Mr Leith said the United States imports most woollen apparel during August to October, the lead-up to the Northern Hemisphere winter.

“The US 2014 import volumes during this period will determine whether US demand increased and whether this will flow through to stronger demand for Australian wool from processing countries in 2014–15.”

He said growth in the export of wool on skins has partially offset reductions in the export of greasy and semi-processed wool, but the supply of sheepskins for export in 2014–15 is forecast to fall, reflecting fewer sheep and lambs slaughtered.