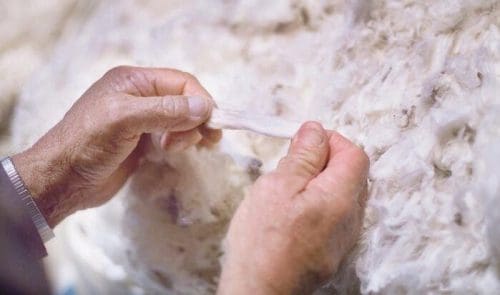 The Australian Wool Exchange said there was originally 49,990 bales gazetted for sale tjhis week, but the fall in prices on the first and second days of the auction series prompted many sellers to withdraw their wool prior to sale.

After these withdrawals, the final national offering total was 46,256 bales, a reduction of 7.5 percent, AWEX said. Even so, brokers passed in a further 14.2pc of the actual offering.

AWEX said the market performed with mixed results, with micron playing an integral part in price movements. The strongest buyer demand was in the finer microns, this demand helped push prices higher across the country for fleece wool 18 microns and finer.

“This was reflected in the individual Micron Price Guides (MPGs), which for 16.5 to 18 microns rose between 5 and 80 cents.

“The demand for the medium/broad microns was not as pronounced, as a result these wools sold at lower levels than the previous series.”

AWEX said the Micron Price Guides for 19-22 microns across all three regions fell by between 20 and 57 cents.

“The up and down movements across microns, resulted in minimal movement in the AWEX Eastern Market Indicator (EMI).

The EMI lost 9 cents for the series, closing at 1291c/kg clean, with the EMI in US dollars fell US7 cents to US996c/kg clean.

AWEX said the market finished on a positive note, with Melbourne selling in isolation on the final day (Thursday) and recording increases in the Southern MPGs for 16.5 to 20 micron of between 15 and 53 cents. The EMI (which only included Southern components) added 6 cents for the day.

AWEX said the 17 micron MPG in the south rose to 2172c/kg clean, its highest level in nearly two years.

“The rise in the finer microns, coupled with the fall in the coarser edge, has increased the price differential between microns.

“This is best highlighted by comparing the difference between the southern 17 and 21 micron MPGs,” AWEX said.

“This difference has grown to 927 cents, compared to a difference of 756 cents a month ago.”

Next week’s offering is similar, with 45,544 bales currently available.