VICTORIA’S regional meat processors could have their workforce restrictions eased as early as next week if the regional COVID-19 rolling case average remains below critical trigger levels.

Under the government’s roadmap for re-opening the state, the current workforce restrictions on regional processors can only be eased when the regional Victoria daily new case average stays below five cases for 14 days and there are zero cases with an unknown source.

Reiterating comments made on Thursday, Mr Andrews today said “regional Victoria is poised to take a step and potentially two steps (on the roadmap)”. This could happen “as early as next week,” he said.

“We’ll have more to say about that next week as get closer to that 14-day marker as we had indicated,” he said.

“But again it is an opportunity to say thank you to every single regional Victorian in a big regional city to the smallest of country towns, they’re doing a mighty job in coming forward getting tested, following the rules and that’s why we’ve been able to drive these numbers down.”

However, Mr Andrews today resisted suggestions of dividing up regional Victoria to allow those with lower case loads to open up earlier.

“That is not in fact the case, we are on track at 4.7, let’s deal with that Echuca issue … and we are poised to be able take not just one, but potentially two steps, as early as next week,” he said.

“The notion of regional Victoria moving as one is exactly what we want, not in six weeks’ time, but as early as next week.”

He said he was “very confident regional Victoria can move and take steps as one as early as next week, that is exactly the strategy working and is something that everyone regional Victorian should be very proud of.”

The Premier said at this stage cases in the Geelong corridor “were not holding regional Victoria back” and any inclusion of the Geelong in a ‘metro bubble” would only be done at the last possible moment. Mr Andrews also said he would have more to say about a harder regional/metropolitan border.

Regional re-opening would be ‘heavily caveated’

On Thursday, Mr Andrews said regional Victoria’s progress on the roadmap would be “heavily caveated.”

“We need to make sure that we continue that trend going forward, but we’re confident that those numbers are low and getting lower and that means that there will be an opportunity for us quite soon to take a step or steps towards that COVID normal for regional Victoria.

“We’ll then have to defend that in terms of testing numbers remaining high, people following the rules, COVID-safe work plans, particularly when it comes to workplaces large and small.”

Mr Andrews said “regional Victoria was very close to being able to take substantial steps towards a COVID Normal”.

Under the roadmap, ‘COVID Normal’ would be reached when there have been no new cases for 28 days statewide with no active cases statewide and no outbreaks of concern in other states or territories. ‘COVID Normal’ status enables industries to open with a COVIDSafe plan without restrictions.

Under the current Stage Four lockdown restrictions, large regional and metropolitan meat processing facilities, except poultry plants, are currently ‘heavily restricted’ and must continue to operate with not more than 67pc of their daily peak and daily total workforce capacity. Businesses with 25 workers or less are exempt, but plants with more than 25 workers are required to work at two-thirds of their peak workforce capacity or to 25 workers, whichever is higher. 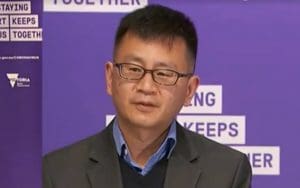 “And in regional, 4.5 (case rolling average) as mentioned, and eight of those are of unknown source.

“We are still looking obviously into the last of those cases to work out when the 14 days will be up, but obviously I’m sure my friends in regional Victoria will be holding their breath to making sure that nothing else comes up in the next week or so,” he said.

“But we hope that that will be sometime later next week.”

“I think that with all the comments made by people across the regions and the different industries that extra attention is now being paid to what can be done and what practical solutions are possible.

“That’s all really good, and as long as no cases pop up to muck the averages, surely we are in a position to start increasing the capacity of industry.”

However, it seems regional processors might have their restrictions eased before metropolitan plants. Under the roadmap, for workforce restrictions in metropolitan processors to be eased, the statewide new daily case average has to have stayed below five cases for 14 days with no cases with an unknown source.

Mr Crisp said it was unfortunate that some of the state’s best meatworks were located in metropolitan areas.

“And it is going to be tougher for them to compete if others can lower their costs by getting back to a proper capacity, hopefully that is still short-term and they work that out as well.

“There is nothing you can do, you can only open up where you can as much as you can.”

“Yes, very heartened as we continue our negotiations with government on workforce restrictions especially in the regions.

“All this data helps in determinations,” he said.

Industries are stepping up – Andrews

“Even those really high risk industries, people are doing an amazing job in being as safe as they can be and that’s why a feature of these last few weeks, these last few months even, has not so much been big outbreaks in high risk centres – there have been some – but it’s a very different place and that sense of continuous improvement industry-by-industry workplace-by-workplace has made a massive difference.”

On Thursday, Mr Cheng said there were not many cases of unknown source in regional Victoria.

“The cases that we have we know where they are.”

He gave the example of one case in Colac resulting in 30 further cases recently.

“But we know where they are, we think we’ve got that under control and they didn’t have any cases yesterday – it’s obviously a situation that we are keeping a very close eye on.

“These are the sort of factors that we are going to look into as we make that judgement about whether we can transition to that third step to relax some of these restrictions,” he said.

“We need to be looking at this every day.”

He said the government will be looking at the improvements that are made with case and contact management. Mr Cheng gave some comparisons where other places were at similar case load stages earlier in the pandemic.

“In New Zealand on the 27th of April as they started to open up they had five cases a day, New South Wales on the 15th of May had 3.8 cases a day and in metropolitan Melbourne on the 1st of June we had six cases a day, but we had more unknown source cases at that time.

“So really this does point to that we need a substantially lower number of cases than we have at the moment, but we are getting there.”