AUSTRALIAN farmers are flocking to aggregate their carbon and environmental assets while protecting their valuable farm data via a unique co-operative structure.

With Australia’s carbon market forecast to grow from $226 million last year to $24 billion by 2030, and pressure on governments to set ‘net zero’ targets, farmers are focussing on income opportunities in reducing greenhouse gas emissions and meeting market expectations.

“The financial rewards for reducing greenhouse gas emissions are there.

“The problem is farmers know what their tractor costs, and what their land is worth to the bank, but most wouldn’t have an idea how to track the information they need for voluntary carbon offsets nor how to go about negotiating it,” he said.

“There are 90,000 farmers in Australia, but only the very largest can tap into this, with only 210 agricultural carbon projects registered under Australia’s Emissions Reduction Fund so far.

“A lot of farmers want to improve their land, to put methods in place to make a drought less severe. Now they can be recognised for it and paid for it,” he said.

“It (Regen Farmers Mutual) puts farmers in the driver’s seat.

“It helps farmers come together and aggregate in a location or a region to do a carbon, biodiversity or water transaction, and because it is a mutual, 80 percent of the value stays with farmers, rather than with other brokers you would have to pay 30-80pc of gross returns,” Mr Clarke said.

“The farmers retain more of the value because they own the broker.”

The shared ownership of the Regen infrastructure would also enable greater efficiencies in training, execution and compliance, and broaden the types of transactions and the value captured from data and provenance, he said.

“It also allows the farmer to tap into premium, purpose-driven brands which like that they are environmentally sustainable.”

Farmers queuing up for asset assessments

Regen Farmers Mutual is due to be launched early next year and has a waiting list of about 250 farmers keen to get an initial environmental assessment of their farm carbon and biodiversity assets.

The mutual has also created a majority-owned subsidiary Regen Digital to raise up to $200,000 in an equity crowd-funding campaign and has already secured $200,000 of a planned $300,000 target from institutional investors to finance a digital environmental asset platform comprising ‘digital twins’ of members’ farms.

“Because it is owned by farmers, the farmers control the data and they have the mechanism through that digital twin to be able to share that data with consumers – that’s the purpose.”

Mr Clarke said aggregation enabled farmers to be proactive rather than reactive in marketing their environmental assets and credibility to corporates and governments, domestically and overseas.

This could also assist participating Regen farmers in accessing European markets in the face of the European Union proposed carbon tariffs on carbon-intensive products.

“One hundred percent, the digital twin is designed to provide that credible data source for the Europeans to determine that this farm is carbon neutral.

“If we have farmers gathering data in a region they will be able to aggregate it through the Mutual and share that with the Europeans.”

Data should be owned and controlled by farmers

Mr Clarke said the mutual did not accept that farmers’ data is a public resource or should be owned by the company providing a management service.

Other ag data management companies claim ownership of farmers’ data through user agreements, but Mr Clarke said the mutual gives farmers the control to maximise returns from their data for their benefit rather than other companies capturing value for their shareholders.

Ultimately the digital eco-system will incorporate blockchain capabilities for full supply chain transparency, but Mr Clarke said the Regen process would start by helping farmers understand what the value of their environmental assets is.

The crowd-funding campaign has raised $91,000 from almost 100 investors who include large farmers with more than 100,000 sheep to smaller lifestyle farmers with just a few hectares of land.

“That’s our strongest indication that there is demand from farmers to understand what the opportunities are in environmental markets and to do it in a way where they control the data.

“People also understand that carbon is just one part – with AgForce there is AgCarE methodology where they are trying to capture whole farm practices, including animal welfare,” he said.

“We can see that those whole-of-farm measures might have more value — particularly if farmers control the data that demonstrates it, to the likes of a Coles or a Woolies — than a carbon deal would, because a whole-of-farm deals speaks to what consumers understand.”

Mr Clarke said the Regen environmental assessments would also inform future property values with banks expected to flip from viewing a carbon contract as a net negative to being a net positive by “doing good things on your farm” that increase soil carbon content.

“Property valuations are going to change and take into consideration farming practices.” 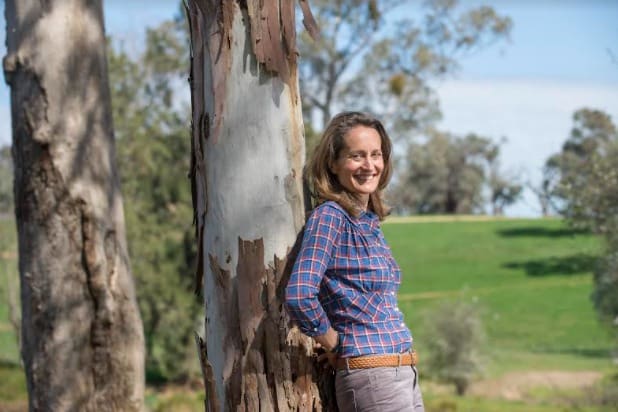 Certified non-mulesed Merino wool and Poll Hereford beef producer Clare Cannon at Woomargama Station near Albury has been accruing carbon offsets on covenanted land on her 2630 hectare property on the foothills of the Great Dividing Range. The property has a 5km creek, three dams and grassy box woodlands.

“Over the last 35 years, my family has planted over 100,000 trees and we have a third of the property under covenant managed by the Biodiversity Conservation Trust.

“I feel that there are opportunities for the business to be rewarded both for carbon and for biodiversity,” she said.

“It’s an very exciting opportunity, we are grass-fed only with the Poll Hereford and we are accredited for wool with the ZQ Merino program for a high sustainability and animal welfare, non-mulesing, supply chain that goes through to companies like Ice Breaker and North Face.”

The property has the highest level of ZQ accreditation available and the highest biodiversity rating, she said.

Ms Cannon said the Regen Farmers Mutual model appeals to her because it offers her a greater share of the returns.

“I think it is a great model, it is farmer-focussed and it’s farmer-friendly.” Some of the Woomargama Station sheep flock.