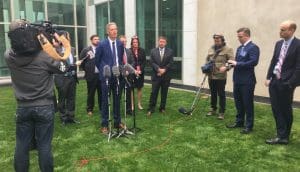 AUSTRALIA’S livestock exporters and farmers increased lobbying for the live sheep trade this week as politicians returned to Canberra and activists protested against continued Middle East shipments in Adelaide.

The representatives scheduled several meetings over four days this week to put the case for live sheep exports in the face of the release of more footage of dead sheep on live export vessels, conflicting figures on the impact of trade suspension, and a Private Members Bill to phase-out the trade proposed by Liberal MP Sussan Ley.

Mr Mahar said the delegation was seeking a considered and meaningful response from decision makers that focused on the sustainability of Australia’s live export sheep industry.

“We stand behind the live sheep trade, but we want to see changes.

“Like all Australians, farmers were distressed by the footage and circumstances covered by 60 Minutes,” he said.

“There is simply no place for poor animal welfare in our industry including in supply chains and we won’t tolerate it.”

Mr Mahar said industry was committed to continuous improvement in animal welfare and took seriously its responsibility to consumers and the community.

“We look forward to reading the recommendations contained in the report when it is released.”

Mr Mahar said farmers are calling for meaningful change to the live sheep industry that will enable it to operate in a way that meets the animal welfare expectations of producers and all reasonable Australians.

“However, we must have all the objective, evidenced-based information to hand before any decisions are made on the future of the industry.

“A ban of live sheep exports is not the answer,” he said.

“As we continue our discussions over the coming weeks and months we will be calling on our elected leaders to demonstrate pragmatism not populism and emphasising one key message – fix it, don’t ban it.”

The McCarthy Review into Middle East sheep export shipments during northern summer months is expected to be handed to the government this week and possibly released publicly next week.

“Exporters must lead the way in animal welfare outcomes, backed by the latest scientific evidence, while embedding a culture of industry-wide change for a sustainable live sheep trade.

“Our industry’s global leadership role in livestock welfare, transportation and supply chain management will be bolstered by our reform agenda,” Mr Westaway said.

ALEC said its submission has directly addressed transport safeguards during the Northern Hemisphere summer, including lighter stocking density, refinements to the heat stress risks assessment (HSRA) and the use of a wider range of developed animal welfare indicators to measure performance.

Industry-backed transparency and governance measures recommended to the McCarthy Review included previously flagged support for the role of independent observers on vessels, the establishment of an Inspector General for the Welfare of Exported Animals and a new livestock export Code of Conduct.

ALEC recommendations to the McCarthy Review include:

An Independent Observer on Middle East voyages during the 2018 Northern Hemisphere summer, at the discretion of the regulator, and for future voyages based on a risk assessment of each voyage

Vessels departing Australia from June 1 to August 31 2018 for the Middle East will have a sheep stocking density governed by the Heat Stress Risk Assessment (HSRA) model. Until the HSRA can be updated, specific stocking rates for voyages for this period will be applicable for the Arabian Gulf (the higher of 17.5pc below Australian Standards for the Export of Livestock requirments or HSRA density) and for the Red Sea (the higher of 10pc below ASEL or HSRA density).

The introduction of new animal welfare measures for the 2018 Northern Hemisphere summer, including the development of reliable and practical animal welfare indicators which are already being piloted

Arabian Gulf multi-port voyages from June to August 2018 to use Kuwait as the first discharge port, reducing the effective stocking rate for subsequent discharge at higher humidity ports

An independent review of any high mortality voyages, in addition to the regulator’s investigation

“These proactive, meaningful steps are driven by real cultural change in our industry and a commitment to improve the export conditions for live sheep to the Middle East,” Mr Westaway said. 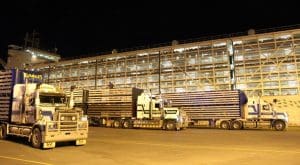 The MV Al Shuwaikh being loaded at Adelaide.

In Adelaide yesterday, despite RSPCA Australia demanding the Middle East-bound MV Al Shuwaikh not be allowed to depart, exporter Emanuel Exports finalised loading of about 60,000 sheep and 75 cattle, with another 12,000 sheep to be picked up in Fremantle.

The Kuwait-flagged livestock carrier received a valid Australian Certificate for the Carriage of Livestock from the Australian Maritime Safety Authority and with DAWR approval is to be loaded at a stock density 17.5pc below current ASEL requirements.

The Australian Maritime Safety Authority said it conducted a livestock pre-loading inspection on the ship in the Port of Adelaide yesterday, after which the ship was cleared to load livestock. The inspection found no deficiencies with the ship’s ventilation systems, AMSA said.

A Department of Agriculture and Water Resources spokesperson said all Middle East-bound live export shipments will have an independent observer, to get a clearer picture of onboard conditions and ensure exporters complying with current legislation.

“The observers will monitor, review and audit the activities of the exporter and accredited veterinarian on board the vessel.

“The cost of the observer will be recovered from the exporter.”

Some exporter’s licences have had additional conditions applied, including reduced stocking densities and additional reporting, the DAWR spokesperson said.

Consistent with Australian Veterinary Association recommendations to the McCarthy Review, RSPCA Australia said Middle East voyages from May to October – the hottest time of the year in the Middle East – should not continue, due to the high risk of suffering and death for animals.

RSPCA Australia Chief Science and Strategy Officer Dr Bidda Jones the Al Shuwaikh is more than 30 years old and one of only three remaining twin-tier ships, set to be phased out as part of a current maritime safety review, on the grounds that they are unacceptably dangerous for animal welfare.

“These sheep will be arriving in the Middle East in late May, early June, and that’s when some of the damning footage we’ve seen was captured,

“Yet again, we cannot see how the Secretary of the Department could possibly meet his regulatory obligations and be satisfied that the travel arrangements are appropriate for the animals’ health and welfare,” she said.

“A 17.5pc reduction in stocking density has no scientific foundation and will do nothing to alleviate heat stress risks.

“We’re just days away from the release of the McCarthy review, and – given the clear evidence and overwhelming consensus among key welfare stakeholders – it’s difficult to see how that report could recommend anything other than stopping voyages during the May to October period,” Dr Jones said.

“Put simply, this ship must not be allowed to leave with Australian sheep on board.

“It’s quite extraordinary that given the current environment, this export is even a possibility,” she said.

RSPCA Australia’s McCarthy Review submission recommended the cessation of Middle East voyages during the May-October period and that sheep on board all voyages must have sufficient space to be able to easily access feed and water and lie down at the same time. In order to meet these basic requirements, current space allowance must be at least doubled, the body said.