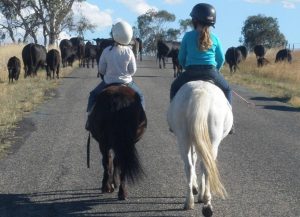 Farmsafe Australia and the NFF are calling on farmers to keep children safe.

FARMSAFE Australia is calling on farmers to reverse the trend in on-farm injuries and fatalities involving children.

Children under the age of 15 years make up about 20 percent of on-farm injury fatalities and are over represented in all on-farm injuries.

Farmsafe Australia chair Charles Armstrong called on farmers to reverse the child injury trend and asked all farmers to be pro-active and take steps to protect the farmers of the future.

The biggest risk to children on farm is drowning, especially for children younger than five years of age. However, other major issues include quads, machinery and vehicles.

“There are very clear things we can do to protect our children.

“It’s not about wrapping them up in cotton wool, it is about taking sensible steps to reduce the chance of things going wrong,” Mr Armstrong said.

“A key requirement for all farms is to have a secure safe play area for children under five years.

“Whether you are parents of young children, a grandparent or simply have kids visiting on your property every now and then, a secure play area is a must.”

Tragically, about 30pc of the child deaths on Australian farms involve farm visitors.

Quad bikes are a particular risk for children

“We are pleading with parents to ensure children under 16 years do not ride, or be carried as passengers, on quads of any size.

“Last year three children were killed as a result of quad bikes incidents. Put simply, the risk is not worth it,” he said.

“Kids don’t have the physical size, strength, coordination or emotional maturity to safely operate such a dangerous piece of equipment.”

The NFF and Farmsafe Australia said medical organisations indicate that quad bikes of any size should not be ridden by children under 16 years. This is based on their direct knowledge of the injuries and harm that they see in hospitals.

“Of course we want to develop in our kids a love of the land and all things agricultural, but if you want them to help out, put them on a two wheeler, make sure it’s the right size for them, that they have a helmet and other protective gear and are trained and supervised.

“Yes they may still come a cropper, but the chances of serious injury or worse, is far less, as two wheelers don’t crush or asphyxiate riders when they roll,” Mr Armstrong said.

“The two things you can do straight away for young children that may live on, or visit your farm, is to make sure you have a secure safe play area and do not allow children on quads.

“This may not make you popular but sometimes as the expression goes, you need to be ‘cruel to be kind’,” he said.

“Nobody likes to see children in these incidents, so let’s fix these issues for everyone,” Mr Armstrong said.