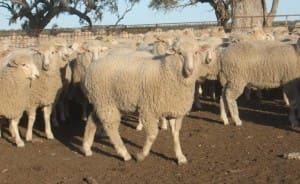 Export demand was consistent across the major saleyards for finished and secondary 12-18kg lambs, supported in some centres by domestic trade buyers, and restockers and lot feeders with empty paddocks but an eye on the season, seeking a short term turn-over.

Dubbo stock agent Angus Barlow from Barlow and Eadon Schute Bell said there are more suckers coming in, including well-shaped Dorpers and light lambs under 18kg sought by the Midfield Group and others for export slaughter.

“We are seeing pretty good buying support, they’ve just all pulled back their rates I suppose, but it I still a pretty good return — $145 for a sucker 16-20 weeks old.”

Landmark Forbes livestock manager Geoff Rice said there was interstate export and local processor demand for the light lambs, but also buying pressure from district producers who have sold lambs looking to restock with 17-18kg lambs.

“Our restockers are looking short-term just because of the season and El Nino, whether it be take it home, shear and turn into a trade weight.

“A lot of our lot feeders have stepped out of taking lambs into the export weights, opting to put a bit of shine on them and put them back in.”

In Victoria at Bendigo, Elders livestock manager Nigel Starick said there was general export and domestic demand for the light slaughter suckers with prices lifting $5-$7. Exporter processors Midfield and Hardwicks were active on the light sucker and old secondary lambs, but there was only light restocker demand

The NLRS said trade weight over-the-hook rats for 2-4 score lambs in NSW were marginally lower this week, with most rates hovering around 560-580c/kg cwt. Heavy weight lamb rates were mostly firm. Mutton rates across all weight ranges were unchanged at 270-400c/kg.

In South Australia, the NLRS said rates eased across the majority of over-the-hook lamb and mutton categories. Old trade weight lambs are now averaging 580¢/kg cwt, down 27c/kg, and the 12-18kg lambs lost 40c/kg to 560c/kg.

Tasmania’s OTH rates for lamb and mutton were unchanged, and Western Australia’s quotes were unavailable when this report was published.

NLRS indicators drift down for trade and heavy lambs

After Tuesday’s saleyard sales, the NLRS quoted all Eastern States Daily Indicators for most lamb categories as lower, except for light slaughter lambs.

The ESDI for mutton is 2 cents lower on 373c/kg and the national mutton indicator closed down 3 cents to 368c/kg.

The NLRS said all weights and grades were represented in a fair to good quality yarding, with some good runs of new season lambs and heavy weight old lines. Merino lambs and hoggets were also well-supplied.

The NLRS said lamb numbers eased, but nearly 3500 new season lambs were offered. The quality of the new season lambs was fair to good, with some lacking condition. Trade and heavy weights were best supplied. The old lambs were mainly heavy weights with a good run of crop-finished trade weights. Not all the usual buyers operated in a cheaper market.

The NLRS said the quality of the lambs was generally good with more of well-finished young lines. Heavy old lambs were also well-supplied. The same buyers as the previous sale operated.

Demand from the trade for well-finished young lambs was strong, with the market trend firm to slightly dearer, up to $4. The dearer trend carried through to the well-finished trade and heavyweight old lambs. There was some variation in average price change, with quality being a contributing factor.

The quality and condition of the sheep was mixed and ranged from very plain to some considered by buyers as too well-finished. The market trend was firm to dearer with little change on heavyweights.

The NLRS said lamb quality continued to be mixed, with a good number of well-finished lambs and some plainer types. The usual buyers competed in a market that fluctuated around quality, but averaged firm to $3 cheaper. Agents offered 14,100 fair quality new season lambs.

The NLRS said there was a good supply of trade weight lambs and several heavy lines. Quality was generally good, although there were a few pens of light weight lambs. Competition was strong, with trade lambs selling firm, while heavy trade and heavy lambs sold $4 dearer.

The sheep were mainly medium weight ewes and wethers, with several pens in full wool. Only a few pens of light sheep were offered. The market held up firm, although some light sheep struggled to maintain last fortnight’s prices.

The NLRS said more new season lamb drafts came forward and comprised about half the yarding. All the regular buyers attended but not all operated at capacity, with the major export companies tending to be the most selective with their support. Price results varied.

The lead drafts of young lambs were mostly firm to a few dollars cheaper than a week ago, while lighter weight pens averaged $5-$7 dearer. A similar trend was evident in the old lamb section, with heavier slaughter lambs cheaper but secondary trade and lightweight kill lambs averaging $2-$10 dearer and more in places. Quality was a factor behind some of the price changes.

The best price for new season lambs was $166 for a pen estimated at about 26kg cwt. Export weight old lambs also sold to $166. Processor demand for lighter weight slaughter lambs was robust and all categories of old and new season lambs under 20kg trended dearer, with most sales from $88-$120. There was limited restocker competition at up to $101.60 for new season crossbred lambs. The lead pens of new season lambs weighing 22-26kg sold from $144-$166, with most pens making an estimated 600-620c/kg cwt and odd sales higher. The quality and carcase finish of old lambs was very mixed, and most of the heavier pens were offered in smaller lot numbers as tail-end drafts come through the system. The limited selection of lambs over 24kg trended cheaper at $136-$155 for most. Trade weight and lighter kill lambs, including Merinos, were keenly supported, with most selling above $90.

Most of the sheep were recently shorn Merino and crossbred ewes. The big lines of Merino sheep recorded the best price gains, while some heavy weight crossbred ewes sold to $121. A range of 320-380c/kg covered most mutton sales, with select lines of Merinos over 400c/kg cwt.

The NLRS said most of the usual buyers attended, although not all operated fully. Quality was plain to average as the winter yardings continued, with just a few pens of better finished lambs that sold mostly unchanged.

The NLRS said the mixed quality yarding of crossbred and Merino lambs sold to solid competition from the usual local and interstate trade and processor buyers. Fewer new season lambs, but more heavy weight drafts were yarded. Processors were keen to acquire numbers at similar rates to last week. Trade buyers were active on trade weight crossbreds and feeders bid strongly on light weights to feed on. A good selection of new season Merino lambs were yarded and demand was strong from restockers and processors.

The NLRS said the usual trade and processors attended, but not all were active. Restockers only had a limited impact. Quality was in short supply, with weight and condition lacking in most pens, and prices eased across the market.

The NLRS said a good number of new season lambs was offered. Quality was much better, with some very good young lambs and a reasonable supply of good old season lambs. All buyers were active and prices were higher across most categories.

There was big increase in the ewe yarding and prices were dearer due to quality and weight. Ewe mutton quality, weight and wool length improved, with some excellent heavy weight drafts offered. Light ewe mutton made $35-$63, with the 2 score mutton making $54-$80 to processors, to be $3 dearer. Better conditioned and heavy weight ewes made $74-$105, which was dearer per head though the cwt price was close to firm. Restockers paid $42-$102 for suitable drafts, with the dearest ewes being close to full wool.

Live exporters were very strong on wether and ram drafts this week. Wether prices lifted $7 with strong live export demand. Heavy bare shorn export wethers mostly sold from $86-$115. Lines with a big skin made to $138. Lighter weight and store wethers sold firm to $10 dearer, making $58-$110. Ram lambs sold from $70-$102 and young rams for export made mostly $65-$95. Older rams were dearer at $51-$85 due to competition from export buyers.